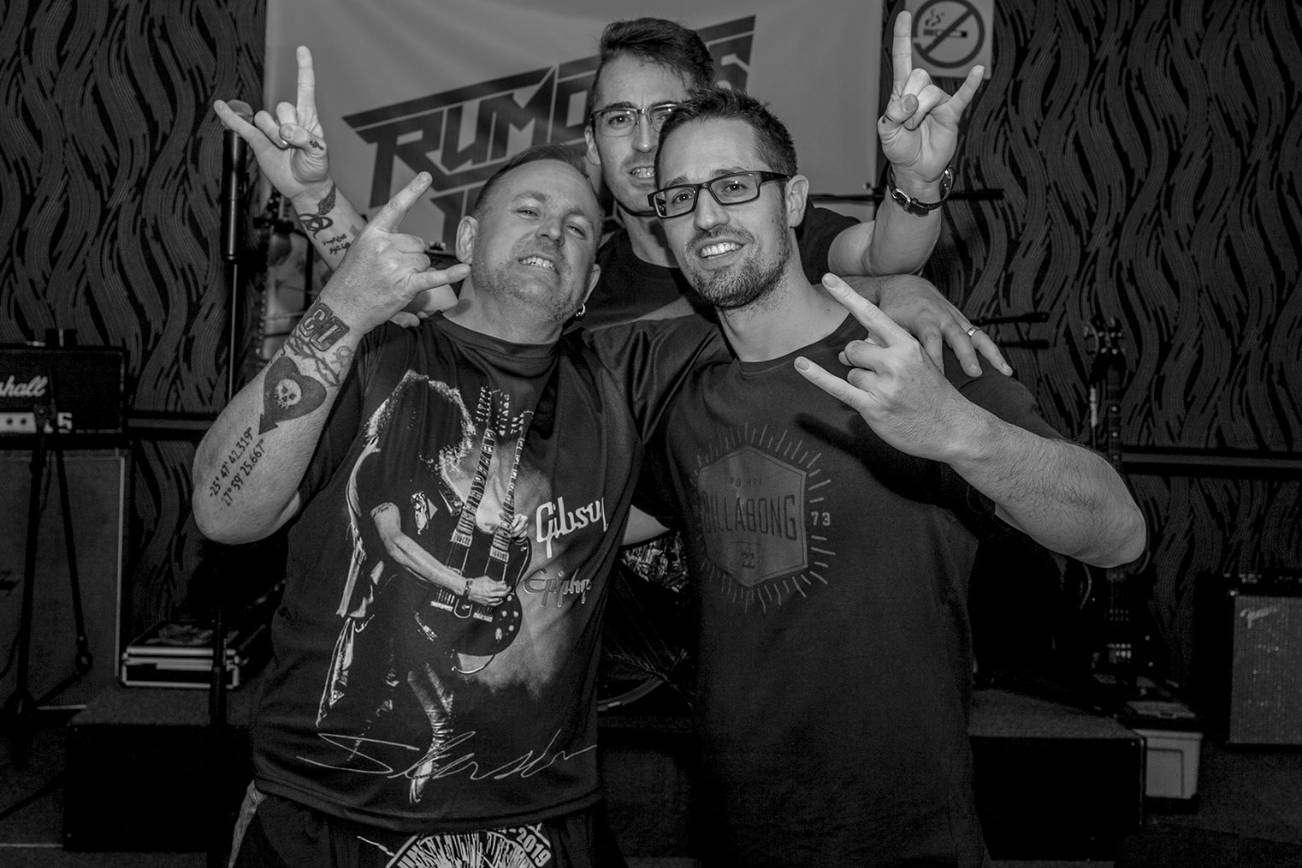 THE KRAKEN IS ALIVE and Living in South Africa: A Chat with Local Festival and Event Organizers About Their Market and “Pirate Metal”

A narrative alternative festival? Count me in!

Last year, saw the rise of a new alternative music events company in Johannesburg, South Africa. They, The Kraken is Alive, began teasing the small and dedicated audience with yummy events that were all pirate themed. Rum, bootiful bandits, waves of good bands on the lineup and bountiful prizes were on offer. Seems too good to be true but ay… The Kraken is Alive have delivered timeously and their shows are getting bigger and better. So, we nabbed a chat with two pirates, Jason Mann and Muhammad Zubi, plus a bandit, David Devo Oosthuizen, to find out what exactly is brewing and why they did what they do. They will be referred to for the purposes of this interview as Kraken Team.

Visit the Pirate Fest official website for more information on this year’s festivities.

Why push for a festival when the other festivals are all on hiatus or dying out?
Kraken Team: People actually do want festivals and experiences, so there’s an element of what’s wrong and why it’s not working. But there’s always going to be this need for experience. We are honoring and fulfilling that need that will always be there. The question is whether we can do that well and deal with some of the bad things going on. A festival, it’s probably the deepest human need to connect with something live.

There are so many inorganic ways, like Facebook Messenger and even Fortnite with DJ Marshmello, but there’s no real connection. Festivals will always be a go-to despite issues from the economy down to promoters and the way that other aspects are handled and marketed. People just aren’t that trusting anymore. Security, bands canceling, parking issues. A lot of rinse, wash and repeat. We believe that we can reverse that with Pirate Fest.

Here is the official Pirate Fest poster, happening September 7th at Marks Park, Orange Road, Emmarentia, Johannesburg, South Africa. Tweak and Fuzigish have since been added to the bill. 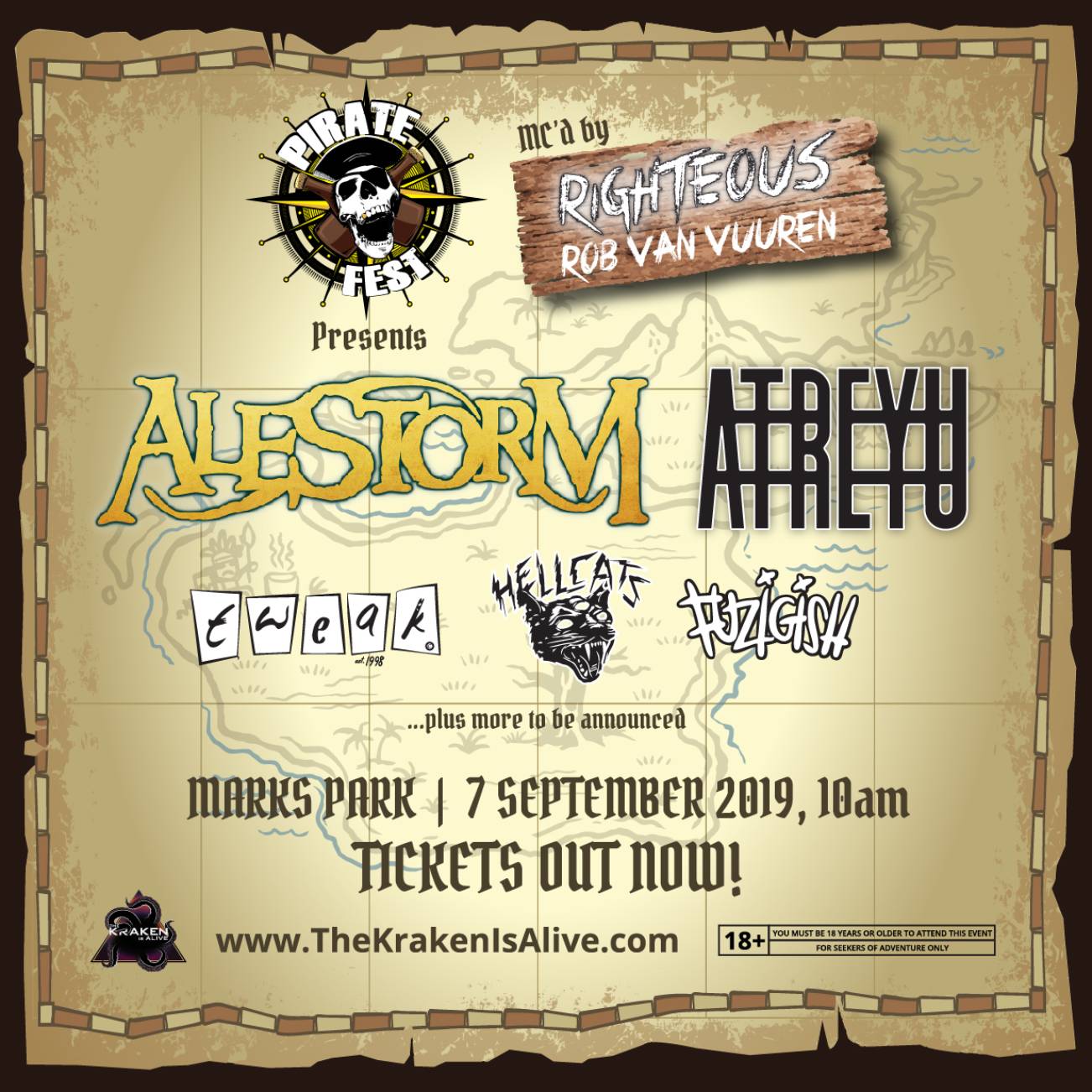 What is different about your approach to putting on a festival?
Kraken Team: You look at international festivals, Download Fest, Wacken, there’s a starting point and an ending point. The world has evolved, people’s mindsets have changed, there’s competition, music is competing with movies, video games… media that is taking people’s attention. We’re trying to make the music festival scene relevant again through creativity, hard work, and our partners. We’re doing something different.

We’re connecting people to a narrative and a story. Why does someone buy anything, like a BMW over a Mercedes? We want people to connect to the adventure, awaken the Kraken! And what happens more often than not with festivals is that people arrive for the headlines only and that’s not fair on the opening acts and other bands putting on a show. They deserve to be there and appreciated. Everyone is going back to the drawing board, but we think that we’ve got the right recipe.

What backgrounds do you guys have in the industry?
Mohammed Zubi: Entrepreneurial in the medical industry, I’ve been starting businesses since I was a teen. Something that’s been a focus is directorial creativity, taking something from incubator and infancy into something sustainable and powerful and has a commercial value. A corporate media eventing activation background with events of different natures, from conferences to exhibitions to trade shows and sports events like the Ram-Slam T20 cricket.

Jason Mann: I’ve done music events a lot. In our experience, we’ve got pretty much every aspect covered, digital media, music, live events, technical functions, financial… everything is covered. Music… since 1994. We have structure from start to finish. And that’s important because it’s the stuff that you don’t see going on in the background.

It feels like a good time to have a “Drink” with this music video from Alestorm.

So where did this all come from, the Pirate Fest?
Kraken Team: The festival actually came further down the pipeline. I was down the YouTube rabbit hole watching Wacken videos and I came across Alestorm, I think the song was “Nancy The Tavern Wench.” I remember driving to get lunch blasting “Drink” at absolutely full volume pumping my fist out the window. I loved this music and wanted to celebrate. It was Tuesday afternoon and it felt like I was at a Beerfest. It evolved from wanting to bring these guys for a beer festival to a music festival and into a pirate festival and having other elements like gaming.

We wanted to choose something that everybody can connect to. Rock n’ roll music is this beautiful gift with far deeper connections and we want to connect as many people to this as possible. How do we be naughty and fun and connect something harder to people? Pirates Of The Caribbean, people connect to that on a very deep level… adventure, rebellion, liberation… things that people hunger for. Pirates don’t care. They want to drink rum at noon. So do it.

How is Pirate Fest being funded? Out of your own pockets? Sponsorship?
Kraken Team: A bit of both. From our pockets, partners, sponsors, bits and pieces that we’re putting together. A lot of awesome brands who’re helping through cash, products, infrastructure, whatever service that they can provide. Just to clarify this isn’t a Kraken Rum festival. It’s not like Red Bull or Captain Morgan who own their events. Same name, different “products.”

Where do you see this by 2024?
Kraken Team: We can’t reveal what we’ve got planned for 2020, there are some very big, exciting things planned. But we’re planning to improve and build on each event. We’re not trying to be another festival. We’re doing our own thing, we’re on our own trajectory. We have our plans and we’re confident we’ll get there. We’re planning to reveal next year’s news in a structured way. It’s like Christmas. Yes, the gift is nice but there’s more to it than that… the build-up is important! We just want to have a great time. We’ve already got people from the UK, from Indonesia booking tickets to come to see Alestorm. The feedback has been amazing.

Here’s another shot of the music festival-making mench! 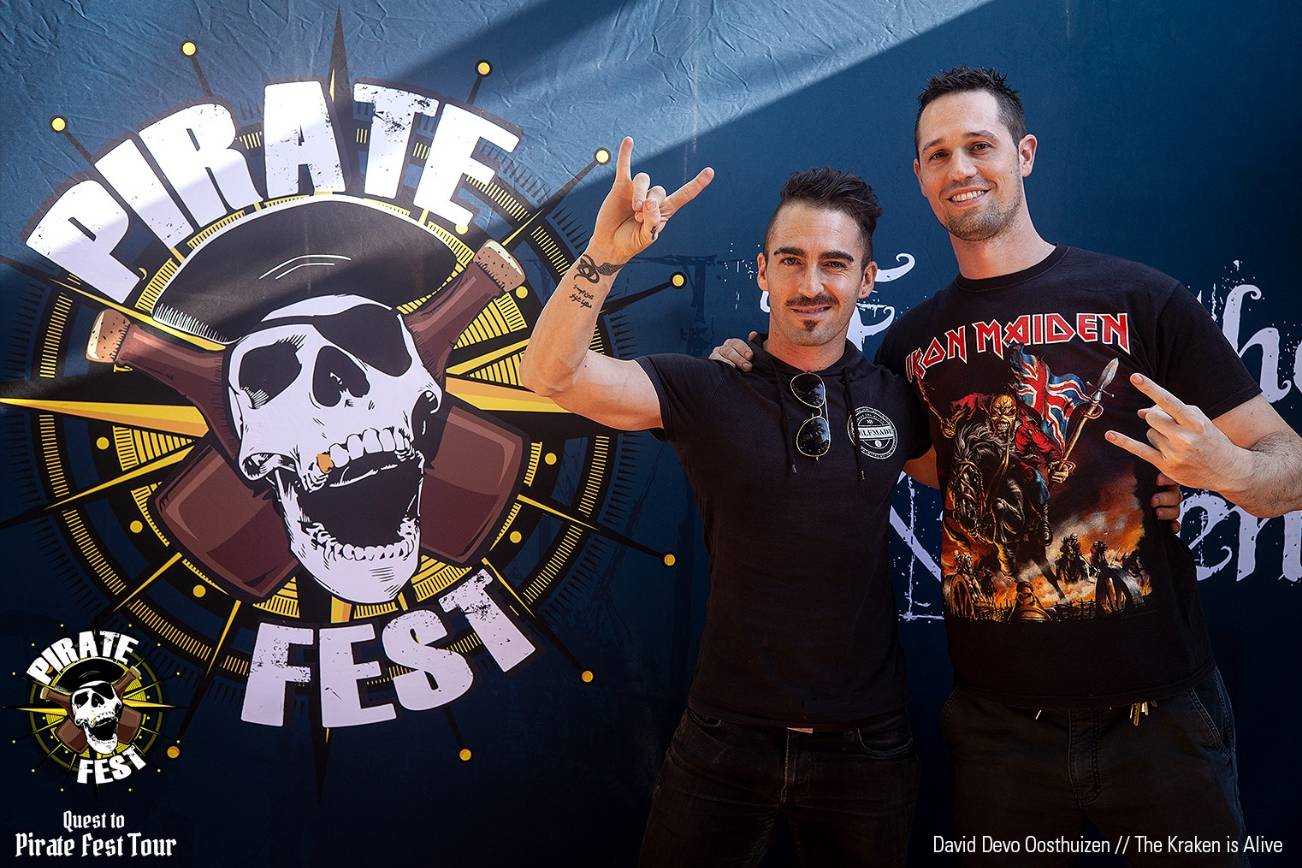 Explain this whole Acolytes thing.
Kraken Team: First let’s explain the Kraken. It’s a mythological beast in Pirates Of The Caribbean. The middle ground when searching for “who are we.” The Kraken represents anything in your life that takes you down, something that stifles you. The Kraken is now on you and it’s alive and it’s on you and you have to react. Our motto is facing your challenges, facing the Kraken. And to do that at this festival you’ve got to be a pirate. But a person alone isn’t enough to face a Kraken. You need a team. And that’s what we’re promoting: unity. Don’t worry about sub-genres fighting with other sub-genres. “Metalcore hates black metal hates death metal.” It’s all the same thing!

An acolyte is a follower of this concept that we call the cult of the Kraken. We’re all acolytes to have fun and enjoy the event and unite. When life gets you down, be a pirate and come with a “lekker” attitude.

And what are your thoughts on the South African music scene?
Kraken Team: I’ve seen some very successful events when they’re done right. Going back full circle to the first question, there will always be a deep need for an experience of that nature. But in the rock scene, there has been this deep fracture. And it feels like it’s fallen down. We’re trying to get it back up on its feet. A lot of events are the same, cookie-cutter. People are bored. That has affected things, audiences being jaded. South Africa is quite a conservative country. People tend to go into their shells. It’s a sleeping giant and we’ve got to find a way to promote it further and stimulate it. It should be more than just a big-stadium event with one huge band.

We’re listening to people. What are their gripes? Why are they conservative. We’re willing to be leaders and get people to stand up. Let’s try to fix this and get people to say “rock and roll matters.” Because it does. All the little places are broken down. If the club owners are distant, the audiences won’t engage. And then the band will have a crappy experience. We don’t have a guiding figure like Barney Simon on radio anymore. And we need that helping hand. The channel has been lost. That is why experience is so important.

If you aren’t already, become more familiar with Tweak with this acoustic video of the band performing “Birthday Card.”