It was ungodly early, the ass crack of noon. Yet, there she was, waiting patiently. Seemingly a bit bleary and weary from the previous night’s gig, the petite, budding rock badass appeared incognito. Donning a street-smart black leather jacket, she hid behind jet black shades with her shaggy, fire engine red coif tucked back under a tattered black ball cap. “I’ve got your decaf iced mocha Frappuccino,” I announced as I approached her private perch in the lobby of the swanky high-rise, beachside Florida hotel. “Oh, thanks, you’re the best,” she replied, clearly in need of an early morning “jolt.”

One of the most exciting young players on the current rock scene, Doll Skin drummer, Meghan Herring, is someone who I had been pursuing diligently since the release of her band’s sizzling sophomore set, Manic Pixie Dream Girl, in 2017. And today was the day when I finally would score that ever-elusive interview, with the pending release of the group’s new album, Love Is Dead And We Killed Her, which you can pre-order here.

In short order, we made our way from the hotel lobby, onto the pool patio and dove into the dialog, a 45-minute conversation in which the 22-year-old musician/songwriter spoke openly about her passion for music and the realities of life on the road, as well as dishing on Doll Skin’s upcoming new record and U.S. summer tour with punk/pop kingpins, New Found Glory.

The first single and music video off of Love Is Dead And We Killed Her is the just-released “Mark My Words.

Since first forming in 2013 on the campus of Scottsdale, Arizona’s (extracurricular) School of Rock, the Doll Skin story has played out at “warped” speed, so to speak. And a logical question might be, how did Meghan, a self-described “little mall girl from Scottsdale,” get so far, so fast?

“I went to the School of Rock grand opening, and that’s the day I met (guitarist) Alex Snowden. There was this girl with black and blue hair. I thought ‘I’m never gonna be friends with her ‘cuz she’s way too cool for me.’ She was so far out of my ‘friends league.’ But then, we got a School of Rock house band together. I met (lead vocalist) Sydney Dolezal after a year of being in School of Rock. I remember the first time I heard her sing, I was so blown away. I heard her sing a Rolling Stones song. I loved her voice so much. And then she also joined the house band. Then I met (bassist) Nicole Rich. I wanted to do a Battle of the Bands thing at my high school. I was 17, a junior. It was at my new high school. None of the kids really knew me. I thought, here’s a way to make an impression. I got the girls together. We wrote a song and we covered two songs. And we won, out of fifteen bands. David Ellefson (co-founding Megadeth bassist) was a celebrity guest judge, and he would later become our manager.”

“Our bond is insanely strong,” Meghan stated, regarding the personal relationships between the four Doll Skin members. “There’s a 100 percent brotherhood within the band. I always say, ‘Best friends before band.’ We are super honest with each other. But not ‘evil’ honest. I’m proud of our relationships with each other, ‘cuz lots of bands don’t have that. We never stop laughing with each other.”

The new album Love Is Dead And We Killed Her is due for release on June 28th via Hopeless Records. 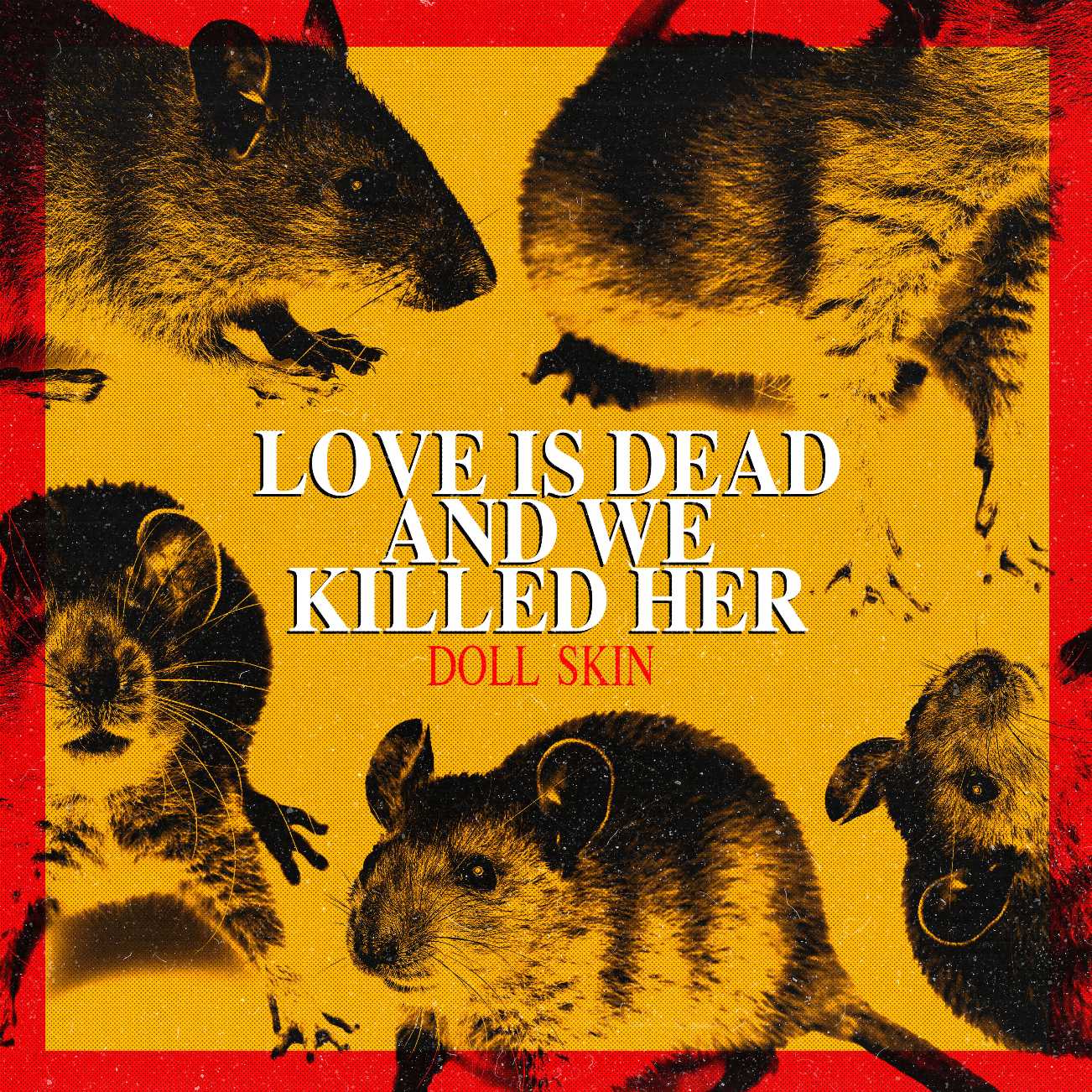 Given Meghan’s description of Doll Skin’s style as, “straight meat and potatoes,” it’s not surprising that her primary early music influences were classic rock artists. “I got really, really into Queen when I was seven or eight. I would listen to Queen’s Greatest Hits religiously. I also got into Elton John at a young age. My mom has seen Elton John like fifty times.”

“I started playing when I was nine years old. My whole life, my parents had been taking me to rock shows. So, I was very into the Arizona local scene when I was super young, like six. We would go to my mom’s friend’s house a lot, and they had a drum kit there. I thought that was so cool! I’d ask, ‘Can I just sit behind the kit?’ I’d just hit them, and make these horrible sounds. My mom and her friends would encourage me to play more, even though it was loud and horrible. So, through being involved with the Arizona local scene and stuff, I took lessons. The instructor said I was a natural (at) my first lesson. I just stuck with it ‘cuz I thought it was right. My parents got me my first kit when I was 10, a sparkly blue Ludwig kit. I don’t have it anymore, I’m so sad. But I had it for a long time.”

“I love Tré Cool!” Meghan beamed at the mention of the legendary Green Day drummer when discussing her current custom SJC drum kit set up (natural dark wood finish shells, trimmed with gold). “I like that Tré has an easy setup. Mine is also pretty simple. I have a 20″ x 18″ kick drum. It’s the kind of kick I can carry, ‘cuz I’m small. I also have a 12″ x 8″ rack tom, which is relatively small, and then the floor tom is 14″ x 12.” And I’ve got a purple 14″ x 5″ snare. I think the kit still looks pretty solid. It’s been on the Warped Tour semi truck for two tours, but it’s been in hard cases.”

“Daughter,” off of 2017’s Manic Pixie Dream Girl has become one of the staples of the band’s growing catalog.

When it comes to her cymbals, Meghan also has a very specific preference. “Everything I have is Sabian AAX series. I’ve got hi-hat, crash, ride, crash, China. For a while actually, during Warped Tour, I broke my China, and it was in the middle of the tour. So, I had to live without it for the last few days. My ride is like my favorite thing in the world, you can just ride on it, and crash on it, it’s got a nice ping. All of my Sabian stuff is pretty bright. I really like bright cymbals, I think they match the sound of the band.”

“I always play matched (grip),” she revealed about her personal technique. “I never really learned traditional (grip). I use Promark Rebound 5A, ‘cuz my arms are so small, I can’t do normal size. Those are my go-to sticks, with a teardrop tip.”

Open and honest, Meghan was refreshingly transparent when it came to discussing the often challenging realities of life on the road.

“Every morning, we (the Warped Tour band members) would all go unload the two trucks, the stage truck, and the gear truck. It’s like we were all in a ‘camp rock’ together. We all were friends, just trying to get through the summer. But it’s a great summer. So, we were all really happy.”

“I think it often takes a while for a person, especially a small girl like me, to get used to life on the road. I’m not worried about this being on the record, but in 2017, I was actually in the hospital for mental health reasons. It was like a wake-up call moment for me. So, when I got to the Warped Tour in 2018, I was prepared. It’s better to be prepared than scared… that was like my thing. 2017 was my anxiety year, it was insane. Then, 2018 came around and it was like, ‘I’m gonna crush this year.’ It’s weird when people come at bands, saying negative stuff. Unless you’ve done it (touring), you have no idea. So, I went through that, I climbed that big mountain, and then I got off the other side, and it’s cool now. Everything’s good. But it definitely took a lot of practice, and getting used to touring.”

A couple live shots of the ladies thanks to Christopher Long. 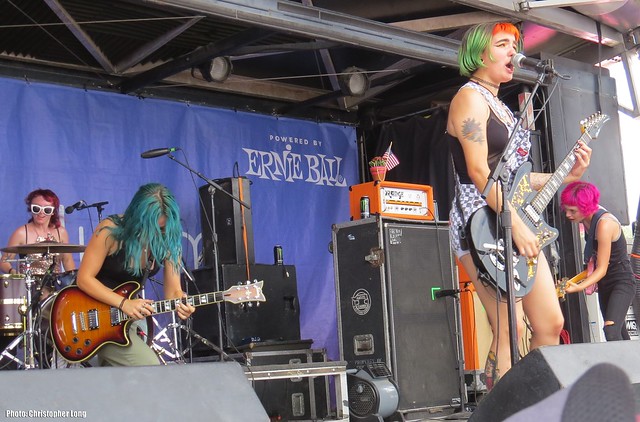 Despite Doll Skin’s impressive previous past accomplishments, Meghan’s sights remain focused fully on the future. And as she slurped down the last drops of her diluting Frappuccino, she dished on the band’s upcoming new record.

“We’ve been in the the studio with our producers, Will McCoy and Mike Green. We went up to Big Bear in California and stayed in a cabin and wrote for 20 days. Then we came back and kind of laid everything down and went over things with Mike and then produced with Will. It was a really interesting production, ‘cuz we never did it like that before. Manic Pixie Dream Girl took five days. This one took a month. Some bands take seven months. We recorded actually at the School of Rock in Gilbert, Arizona. The new record is called, Love is Dead and We Killed Her and it comes out June 28th.”

“We just signed to Hopeless Records, and we’re so excited. David (Ellefson) said, ‘This is getting out of hand and I can’t control this anymore.’ He said, ‘Let’s put you on a different label. Let’s scout around and see what we can do.’ On Warped Tour, Hopeless came up to us, and said, ‘We want you guys.’ So we sat down with A&R rep, Eric Tobin, and he was like, ‘We want you guys.’ I could tell he was testing the water, ‘cuz he asked, ‘Are you guys committed?’ The first single, ‘Mark My Words’ is like Doll Skin 2.0. It’s still us, but it’s kind of on the darker and heavier side. But not like obnoxious heavy. So we’re very excited.”

“Let’s Be Honest,” no discussion about Doll Skin is complete without hearing their early. Here’s an example from 2016’s In Your Face (Again).

Of course, with a new record comes a new tour. And Doll Skin’s 2019 U.S. trek with Hopeless labelmates, New Found Glory, is set to be an epic outing.

“It was weird the way we got connected with them (New Found Glory). We were on Warped Tour, and they were on for like four days. I went to go see them, ‘cuz I love New Found Glory so much. The bass player confessed, ‘I love your band.’ I did NOT expect that at all in any way shape or form. The tour is kicking off on May 30th.”

And just what on earth had brought Doll Skin all the way from Arizona to Florida, weeks before the kick-off of their official tour?

“We got an offer recently to play this private party. It was a birthday party for one of our Florida fans. So, basically, it was a Doll Skin party. It was really great and we had a great time. They even had Doll Skin cupcakes! Is there anything greater than that? We loved it, and it was well worth the trip. It was a nice break from being holed up in the studio.”

Wow, did she just say, “Doll Skin cupcakes?” Mmm, it sounds like a super-dee-lish new merch idea. I imagine they’d be red velvet with colorful icing, sprinkled with a tasty, crunchy topping and served in little metallic baking cups. Maybe, they could be marketed like some type of KISS deal, sold in boxed sets of four, with a different band member’s likeness on each one. I’d definitely take a set of those at the ol’ merch booth this summer… just sayin’.

In sum, this was an interview op I had sought for two long years. And as expected, Meghan proved to be an engaging, unpretentious, world-class pro. As a result, our face-to-face coffee chat was a blast, and totally worth the wait. 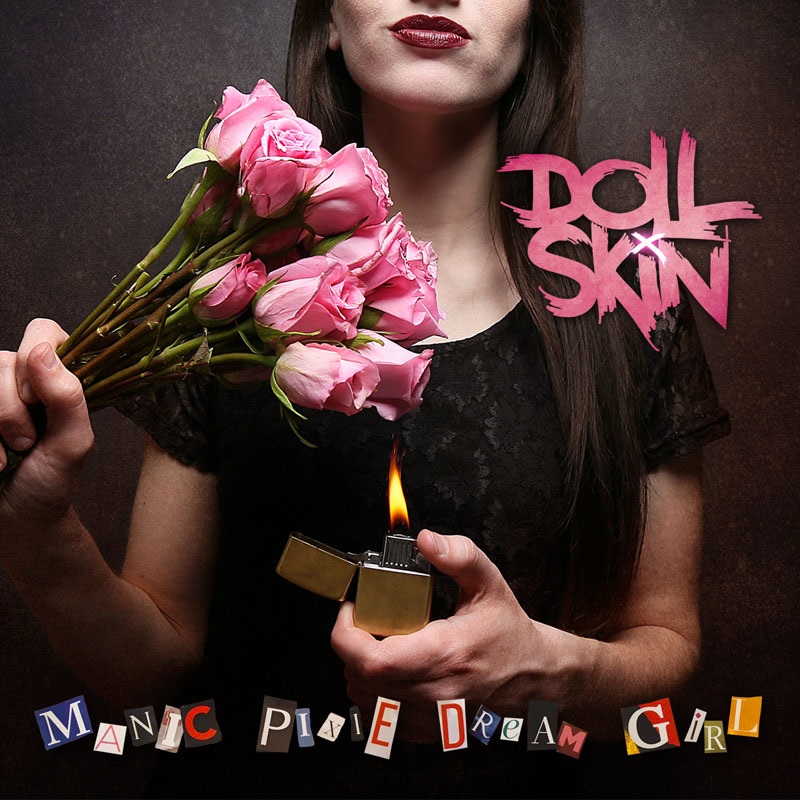 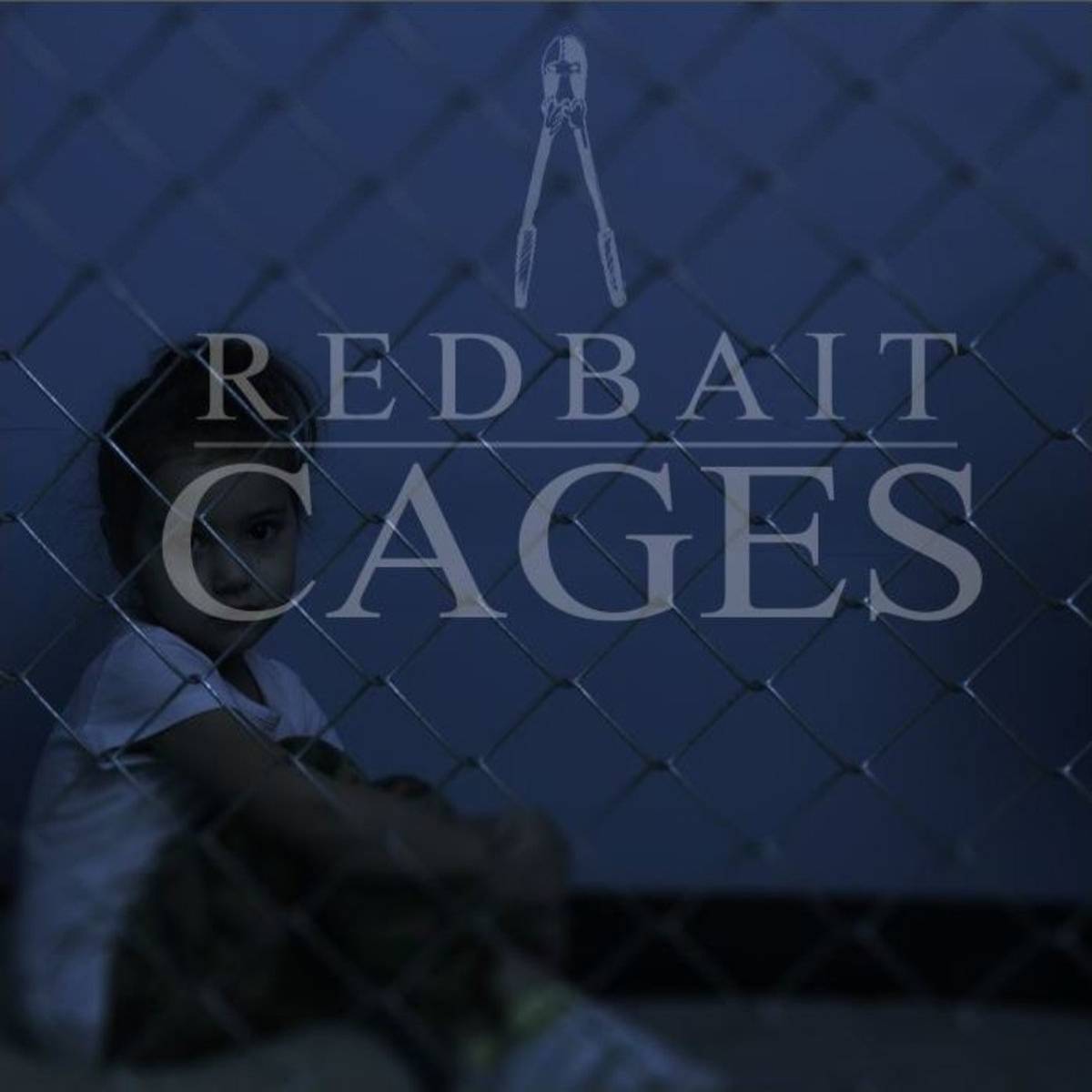 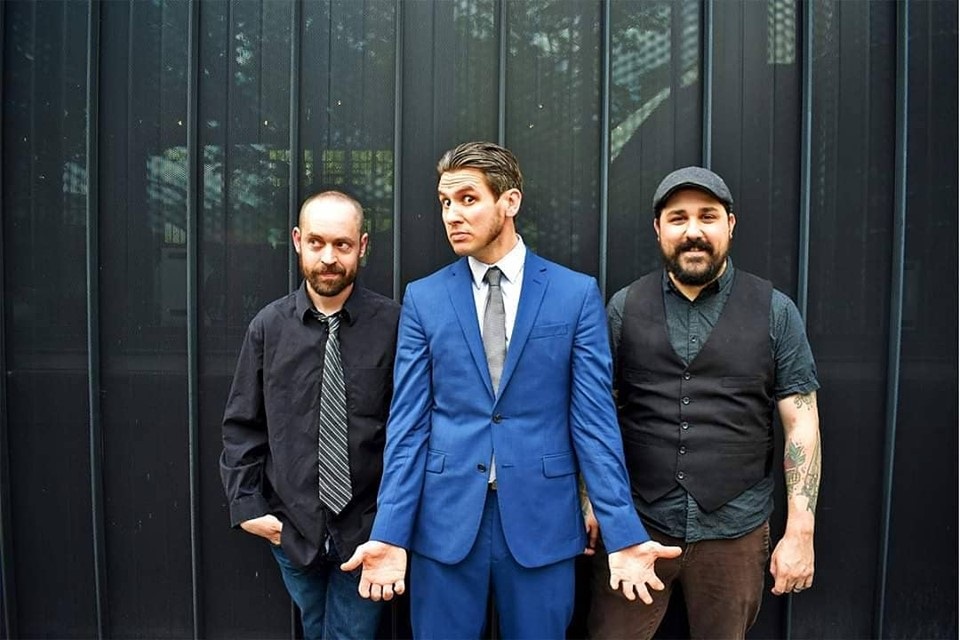