When we first learned about Hong Kong rock quartet Bamboo Star, we were instantly intrigued by the fact that they recorded their latest “No Hard Feelings” EP with renowned producer Bob Marlette (Black Sabbath, Airbourne, Shinedown). Factor in the killer, high-energy tunes, rapid US radio and chart success, plus the incredible claymation video for lead single “It’s Just Business” and we were cheerfully chugging beer at camp Bamboo Star.

Their band name is apparently a “play-on-words for old Cantonese slang” describing someone who’s caught somewhere between Chinese and Western cultures, of which the group commented, “Our music is for anyone who has ever felt like they fit in everywhere and nowhere.” Regardless of where you land, however, you can appreciate what these four musicians are serving up.

Today, because we’ve been hooked on the aforementioned claymation video, we’ve got a special treat for everyone. Bamboo Star, who relocated to New York in December, went through a hard drive full of behind-the-scenes footage and whipped up a brand new video laying out the video’s creation. So, without further ado, here’s the group’s lead singer, Wilfred “Wolf Red” Chung, with an exclusive guest blog diving into the origins of the “It’s Just Business” video, a “story about tyrants and their war against truth, played out by satirically cute clay creatures inspired by human body parts.”

We wanted to create a video which captured the spirit of the music and elaborated on the message of the song. It tells a story about greed and tyranny; of how faith in divisive leaders is so easily abused and how the masses often empower their own oppressors without even realizing it. Despite the grim nature of this, we always prefer to take the position of hope over despair – and to us, we are empowered when we’re able to laugh at something. Claymation was chosen for its nostalgic, child-like style because we wanted to maximize how innocent the whole video looked in contrast to what we were really saying.

The concept of the video came about when (lead guitarist) Terence, (band manager/videographer) Juliet and myself sat together and really considered how to communicate the song in a visual way. It was important to us that we didn’t name any real-life incidents, people or places since these situations are too common everywhere around the world. It was behaviour and actions which we were opposing so it was best that the setting not even be on Earth. We brainstormed a narrative which was simple enough to illustrate the point and set about the character design.

The group release their No Hard Feelings EP on December 7th, 2018, via Vertusent Music Group. 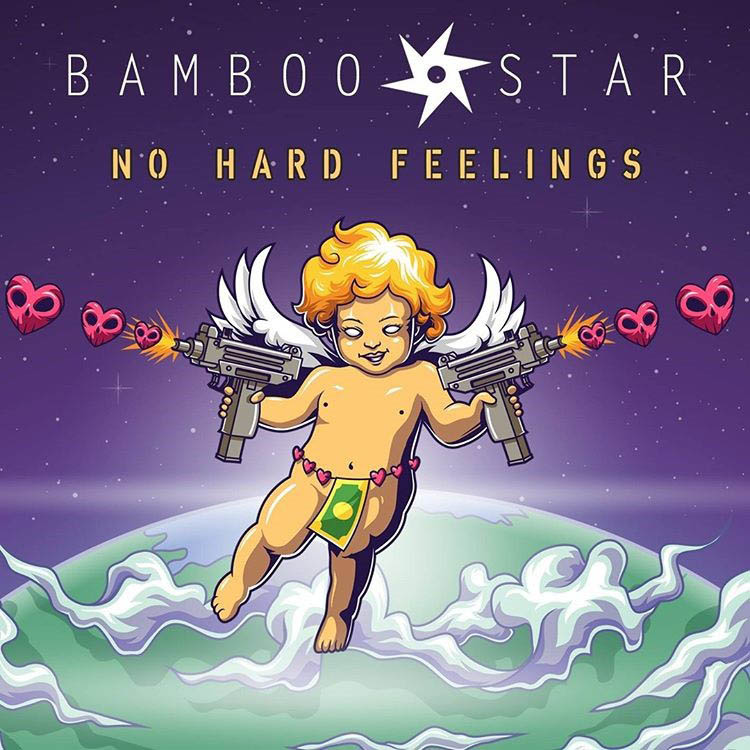 I’ve personally been building models and sculpting since I was a little kid and for pre-production, I worked closely with a friend Sunny Tam who is a professional toy maker at his studio 78Jo to build the figures and props. All of us in Bamboo Star are huge fans of adult cartoons like Rick and Morty, South Park and American Dad, so we were definitely not shy about bringing surreal, gratuitous violence into the script and visual innuendos into the characters. Typically, rock and metal music videos use desaturated colour schemes but the sneering irony and sarcasm of the project called naturally for colours like hot pink and bright turquoise. It’s also the leading release on this album so we wanted it to really jump off the screen when someone saw it. Once we had set the narrative and characters, I drew out the storyboard comic-book style over the next month or so.

The movie set was built on my dining table and all the Claymation sequences were shot in my apartment with a tripod and two desk lamps. Stop-motion takes a tremendous amount of time and I would be shooting every night, my bandmates would come over to help whenever they could. Typically it would take about four hours of shooting each session to produce maybe three seconds of footage. Scenes which had more than three figures in it really needed multiple people present to animate. The models were fairly heavy for what we needed them to do, so we had to think of all sorts of ways to rig them up for scenes where they would be suspended, such as the impaling sequence or explosion sequence. Speaking of the explosion, fun fact: The fireball was made from a pile of fried chicken from Jollibee! We ended up using everything from toothpicks to fishing line to microphone boom stands.

Post-production of the video involved editing thousands of photos. Some scenes required relatively minor treatment (editing out inconsistencies in the background), and many took a lot more work (editing out suspension rigs). Juliet and I probably spent another month on photoshopping and stitching all the sequences together. At the end of the day, the entire process took about nine hundred hours and almost five thousand photos. It was super-challenging but also incredibly fun to do. Ultimately, we have a short film which is meaningful, represents the song perfectly and still mesmerizing every time it pops up in my social media feeds. Even to someone who spent nine hundred hours on it – it was worth every second.