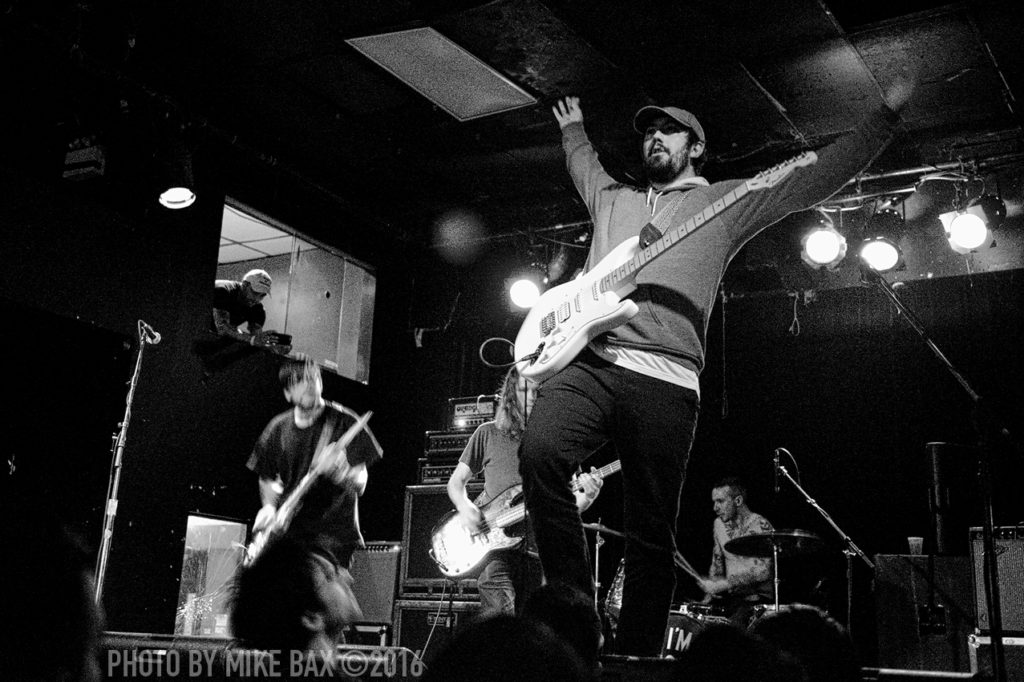 Relapse Records label mates (and road mates, this being their second run of dates together) Nothing and Wrong are early into their first month of touring together, with this show being their third. Performing alongside Culture Abuse and Hamilton’s Dead Tired to a solid crowd of Toronto area music fans, almost every genre of alternative music was represented. Dead Tired brought some hardcore punk; Culture Abuse brought along some of everything – power pop, punk, garage and hardcore. Wrong channel everything that was awesome about 1990 Helmet with a precision level that suggests they have more than a single album and EP to their name and Nothing is the reincarnation of everything great that the 1990 shoegaze genre had to offer all rolled up into a Philadelphia four-piece with two full-length albums under their belts.

Two guitarists from Culture Abuse didn’t make it over the border so the band performed with substitutes. And the bassist for Nothing wasn’t the same bassist I saw them perform with in Atlanta just two weeks ago. God bless the US/Canadian border control.

Some sound gaffs aside, this show successfully boasted four decent sets of music from each of the bands on the bill.

Early attendees got to witness Dead Tired crank out 30 minutes of angry hardcore that most certainly didn’t suck. They had some great energy. Performing in a non-descript grey hoodie and a woman’s bra tangled about his neck, the vocalist from Culture Abuse kept things interesting for the duration of their set, taking time to wrap their bassist up in duct tape from neck to right armpit as they worked through 30 minutes of interesting material.

Wrong finished tuning their instruments and quickly launched into their performance with the house lights still up. In forty minutes the Miami four-piece managed to crank out the majority of their debut self-titled album (released in April of this year) along with some material from their Stop Giving EP and had fans cheering their approvals for the band. In the words of the two guys standing behind me, and I quote: “Holy shit, that was insanely good!” I can think of no better descriptor for Wrong than the band taking the seeds sewn by Helmet 25 years ago and expanding upon them through their own original material. Definitely a band you will want to experience live.

With two incredible albums and rapidly growing word of mouth fan base, Nothing cranked all of their volume controls to ‘eleven’ and pummeled the Toronto audience with a distortion heavy representation of ten of their best songs. Sadly, I wouldn’t describe this as the best performance I’ve seen from Nothing. Some obvious sound challenges managed to make a few of their songs difficult to discern but, overall, the majority of the songs played came off quite well.

Nothing’s new album, Tired of Tomorrow is easily one of the best I’ve heard so far in 2016 and the opportunity for fans to hear some of this new material in an intimate live setting is certainly one of the main reasons everyone was in the room this evening. Lead singer Domenic Palermo chuckled to himself repeatedly at getting the day of the week wrong so early into their tour, suggesting he was in trouble for the remainder of the dates if he was already forgetting what day it was. Palermo thanked the Toronto crowd for coming out to see them, stating that he didn’t expect nearly as many people to be in attendance, and joked that the band had managed to make a second GOOD album so the third one is definitely ‘going to suck’.

Overall, the evening was a success. Certainly from a value-for-the-money standpoint, getting to see both Wrong and Nothing for such a low price was a no-brainer. Nothing had a bevy of new merchandise this evening. They even had a few copies of their hard-to-find Record Store Day colored vinyl of ‘A.C.D. (Absessive Compulsive Disorder)’ available for sale, along with some versions of their debut and their new release on colored vinyl as well.

If this Nothing / Wrong tour is coming your way, do take the time to go and see it. And bring earplugs. The decibel levels will definitely be high.