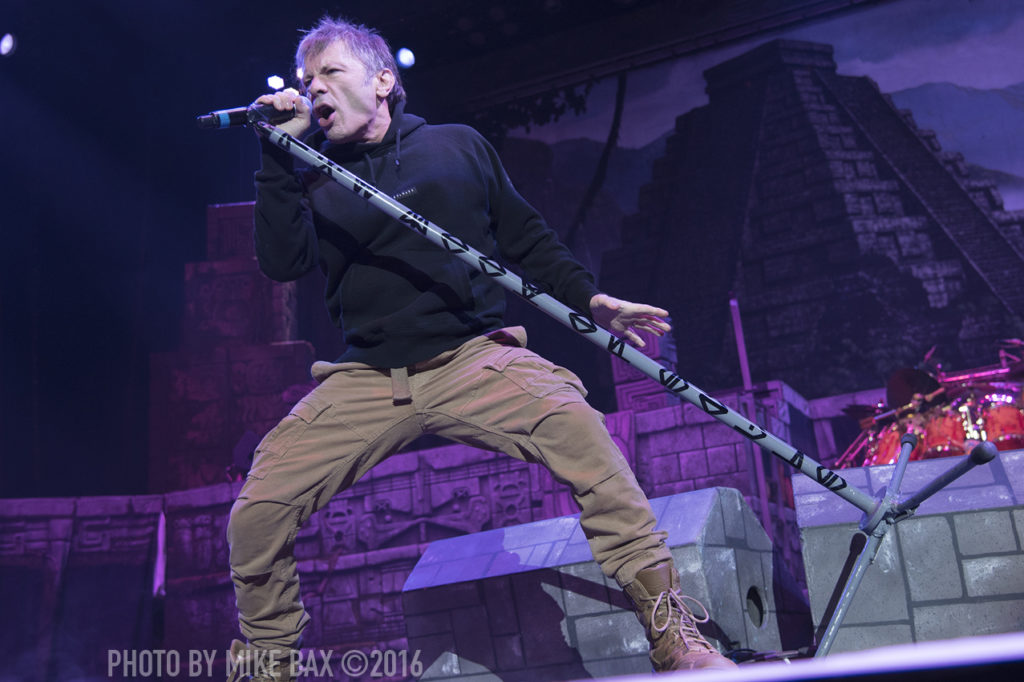 Everybody has a favourite band – that one group that meant something very special to you as a teenager. That one group that could do no wrong. That one group that opened your eyes to what a live concert could (and should) be. While I can cite numerous bands as important to me while I was in high school, no band could top Iron Maiden. Maiden was the personification of coolness when I was 15. Great music. Great logo. Great album artwork. Great live performers. And last night, in front of 14,000 Torontonians, they once again knocked the proverbial ball out of the park with a stellar 2-hour live performance touching on material spanning their almost 40-year career.

In true Maiden fashion, at 8:55pm UFO’s ‘Doctor Doctor’ blared over the PA giving the Toronto venue the 5-minute warning that Iron Maiden was minutes away from blowing everyone’s minds. As the song reached its end, stage hands pulled the fabric tarmacs obscuring the majority of the stage set-up, revealing a U-shaped, Mayan themed stage complete with lights, stairwells and risers. Two raised runways directed towards the crowd (with drummer Nicko McBrain’s kit cozily nestled into rear center) allowed for an elevated platform that vocalist Bruce Dickinson sprinted about numerous times throughout the performance.

The 57-year-old Dickinson showed no signs of easing up during the show, though it’s not an unusual statement for the agile vocalist. However, in light of Dickinson being diagnosed with tongue cancer early last year around the release of The Book of Souls (delaying the band’s touring while he underwent surgery and chemotherapy), I think fans were walking into the venue wondering if he might be a little more fragile during the performance. The answer to that – not at all. If anything, Dickinson exuded a boost of vigor from the experience as he bounced about the sizeable stage like a man half his age.

For intro song ‘If Eternity Should Fail’, a cloaked Dickinson took the stage above McBrain’s drum kit, stirring a bottom-lit cauldron of mystery Mayan elixir. The smoke and light exuding from this cauldron lit up his face like he was telling a campfire horror story – and as the into to the song exploded into drums and guitars, the rest of the band (Steve Harris, Dave Murray, Adrian Smith, Nicko McBrain and Janick Gers) took to the stage and were bathed in lights and pyrotechnics for the duration of the song.

Iron Maiden is amongst the fore-fathers of live concert stage production, boasting multi-layered stages, amazing lights, stunning backdrops, giant puppets and numerous costume changes throughout every performance. Tonight’s show was no exception. Over the course of the evening, the Toronto crowd was treated to an arsenal of high reaching flames, explosions and swirling lights.

Midway through the show (during ‘Hallowed Be Thy Name’) Dickinson wound up using a large noose as a prop, eventually popping it around his neck as he sang and then bashing the end of the rope against a cymbal behind Nicko McBrain as the song came to a close.

The band’s mascot, Eddie, done up in a style complementary to The Book of Souls cover artwork appeared twice. First, he walked on stage at almost 20-feet high adorned with glowing eyes and a glowing pulsing heart – a heart that Dickinson ripped from his chest and tossed to the crowd to cheers from the audience. At the end of the main set, as the song ‘Iron Maiden’ came to a close, a massive inflatable of Eddie rose up behind Nikko McBrain and bobbed about for a minute or so, eliciting roars of approval from everyone in the venue. And yet again as the encore began with the Barry Clayton dialogue that precedes ‘The Number of the Beast’ filled the venue, an inflatable Satan rose up behind the stage to McBrain’s left, staring down the audience menacingly as the song played to the howling crowd. I loved that as the air went out of that inflatable and Satan’s horns deflated, they bowed down in front of his face like bunny ears. It was utterly Spinal-Tap worthy.

By the time the evening closer ‘Wasted Years’ played, I was genuinely saddened that the evening was over. I could have easily stayed up until 1am and listened to another two hours of live songs from Iron Maiden, a band with both the energy AND the back-catalog of material to do so. Ah well. They will be back – Dickinson stated as much as they finished up. The show tonight was so entertaining that I think everyone in attendance will return for that day when it does actually happen.

SET LIST:
Doctor Doctor (the standard UFO pre-recorded intro)
If Eternity Should Fail
Speed of Light
Children of the Damned
Tears of a Clown
The Red and the Black
The Trooper
Powerslave
Death or Glory
The Book of Souls
Hallowed Be Thy Name
Fear of the Dark
Iron Maiden

ENCORE:
The Number of the Beast
Blood Brothers
Wasted Years
Always Look on the Bright Side of Life (Monty Python pre-recorded outro)