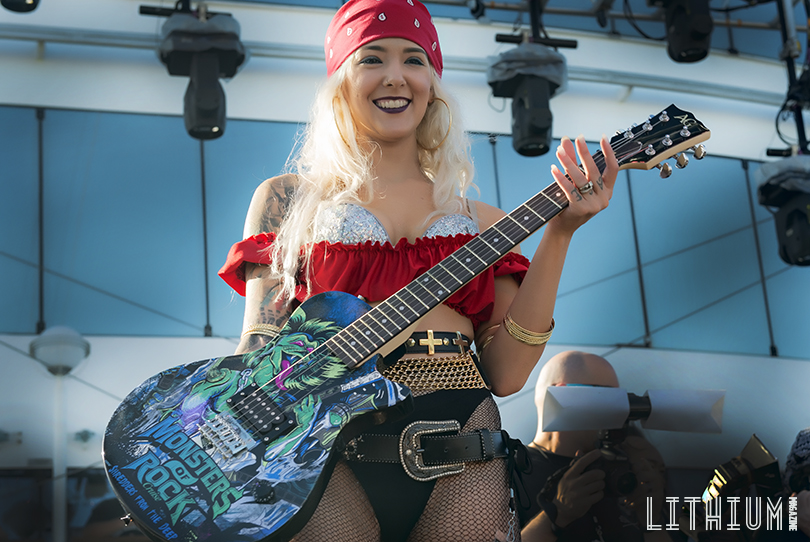 The 2016 Monsters of Rock Cruise was the fifth and largest floating concert festival yet – a metal guitar lover’s dream cruise, featuring almost fifty of the 80’s and 90’s biggest hair metal bands and BADDEST guitarists of the decades.

The Monsters’ Cruise took place on the beautiful  once again, and sailed from Miami, with stops in Nassau as well as Great Stirrup Cay, Norwegian’s private island.  The island stopover offered a rock ‘n roll beach party that included Great White, with a cameo appearance by the band’s newest recruit, three year-old Noah.

The artist line-up for this cruise included an astounding array of extraordinary guitarists and ear shattering 80’s metal bands such as:

Live performances started shortly after breakfast and lasted till the wee hours of the morning. When the day’s live events were over, bands and fans alike converged in the Bliss Nightclub for some hilarious karaoke antics.

In between concert events, artists found to answer some fan questions at some entertaining Q&A sessions. Fans also had the opportunity to have their photos taken with almost every band aboard.

The musical experience is an overwhelming spectacle in and of itself.  Then add cruising around The Bahamas and you’ve got a recipe for: “I think I’ve died and gone to rock ‘n roll heaven”.

Since there wasn’t much time for reading, the ship’s library was transformed into a merchandise store, featuring shirts, hats, jackets, music, limited edition rock print, and all kinds of music swag.

Every sail from port including a ‘Sail Away Party’, and as we departed from Nassau, Tesla the stage on the pool deck. As I took a moment to chat with a few people on deck in between photo experiences, I was told that a neighbouring ship’s passenger, had ripped off his shirt, had replaced it with a Tesla T-shirt and begun yelling that he wanted onto our ship – absolutely priceless.

Guitar clinics were offered for those brave enough to play alongside their idols. There was also the opportunity to join forces with the cruise line’s chef, along with several musicians, and learn a few culinary secrets during “Cooking With Rock Stars”.

There was even a wedding one evening on the pool deck, with none other than Sebastian Bach serenading the bride with a cover of Gun ‘N Roses “Sweet Child Of Mine”.   The bride then turned and tossed her bouquet of flowers into the audience, where one girl caught it and her boyfriend suddenly became very nervous.

Raffle tickets were offered in the casino for a nightly chance at winning $83,500 along with cruise tickets for two, and a Monsters of Rock Guitar, signed by all the bands, was auctioned off on the last night.

The sheer logistics of this cruises was undoubtedly a huge undertaking and totally mind boggling when you consider the amount of setting up and tearing down of stages, the number of security personally, the amazing photographers and videographers of the production team. They worked like a well-oiled machine, and cruise goers were grateful.  Hats off to all of you.

Such an experience makes on feel as though they will never be content to experience a ‘regular’ vacation cruise again.  I know I feel like that.  I’ve definitely been converted.  It’s only rock ‘n roll, but damn, I love it!