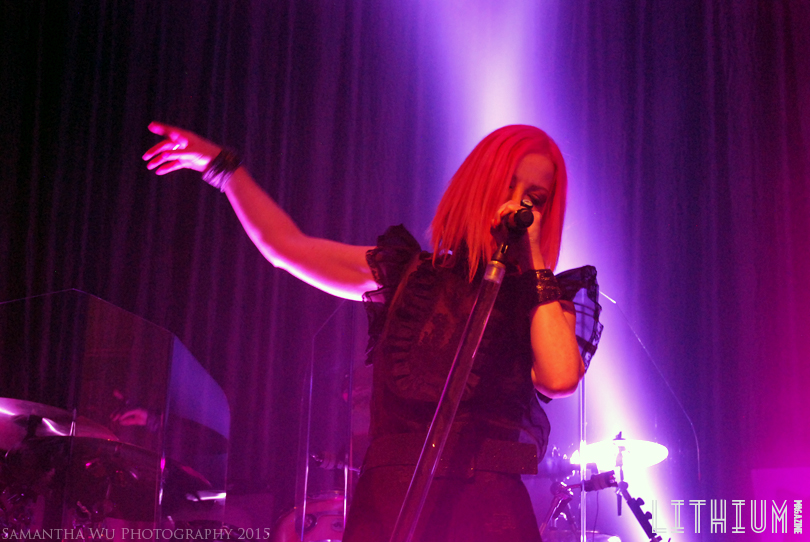 This past Monday night alt-rockers Garbage brought their ‘20 Years Queer‘ tour to Toronto’s Phoenix Concert Theatre to the delight of their die hard fans. Celebrating their 20th anniversary, they played mostly tracks and b-sides from only 1995 to 1996.

Opening with a super cool video montage of clips dating back to approx 1995, it showcased backstage footage of the band mixed with other important events of that year such as the Princess Diana interview, Bill Gates/the internet and the OJ Simpson murder trial.
Clad entirely in black with striking pink hair, front woman Shirley Manson took to the stage and gave the crowd (who she referred to as ‘magnificent beasts’) what they wanted.   She then led the band through songs like ‘Queer‘, ‘#1 Crush‘ and ‘Girl Don’t Come‘, the latter of which is one of my personal faves. Manson also mentioned that the band was 90% finished their upcoming album, and they were heading back to mixing after the tour.

By the end of the evening The Phoenix was so tightly packed that it was difficult to breathe; yet, the like rest of the crowd, I stuck it out to hear ‘Only Happy When It Rains‘ and ‘Stupid Girl‘.  The encore included a cover of ‘Kick My Ass‘ by Vic Chesnutt, ‘Trip My Wire‘, ‘Automatic Systematic Habit‘, which is being debuted on this tour, and they finished with ‘Push It‘.

My one and only criticism of this particular show was the lighting – maybe not so many strobe lights next time?  😉