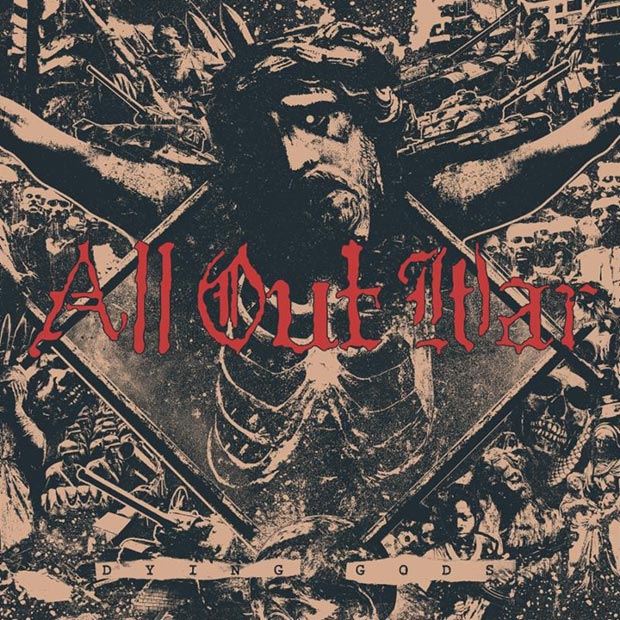 New York metalcore band All Out War are one of those groups who’ve been knocking around the scene for years now and, while they’ve got an impressive back catalogue, they’ve never really kicked on to bigger things. Dying Gods sees the band return with the line-up responsible for their 1998 album For Those Who Were Crucified and, while it might be seventeen years since the release of that disc, listening to this EP it seems that little is going to stop the guys from straying too far from their blueprint.

Featuring seven tracks comprising five originals and two covers, Dying Gods clocks in at just over twenty-nine minutes, similar in length to thrash classic Reign In Blood. In fact Slayer are a good reference point when it comes to the band’s sound. Crushing thrashy metalcore combining the brutal, raw-riffing of early Slayer with the groove and moshability of a band like Hatebreed, tracks like “Servants To The Obsolete” certainly see All Out War hammer their point home but, once they’re over, that’s it, you just find yourself moving on to the next track without anything you’ve heard really igniting that “wow, I’ve got to listen to that again” feeling.

The two covers, Amebix’s “Arise” and Carnivore’s “God Is Dead,” fall under that familiar All Out War style of ferocious punkish riffing without straying too far from the originals. A good indicator of where these long-standing New Yorkers stand musically but, like the rest of this EP, nothing to get overly excited about unless you’re a huge fan of either band.

Check out the track “Nothing Left To Bleed” here.