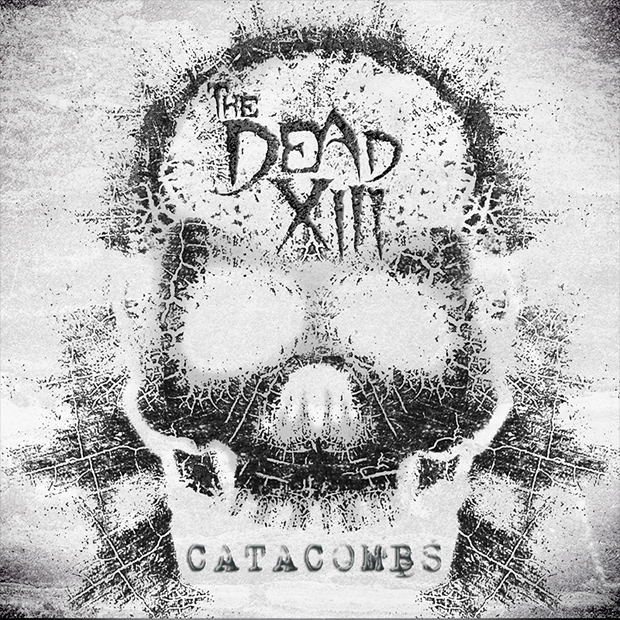 Manchester band The Dead XIII are becoming masters of a dark and racy sound, full of drama and undying energy. The act steer their music like a cart into the depths of hell and shake the devil’s hand as they make their way back to civilisation. But normality doesn’t race through the blood of these tuned-in musicians, they’re a different beast, influenced by many acts including the legendary Misfits. These influences serve the band well as they’re rising so rapidly.

The response the group has gained from the dark contingent is remarkable. They’ve become an underground sensation since their inception, gnashing their teeth as they grow and shock. And by focusing on supreme riffs and macabre wordplay, they’ve studded the minds of the fans with music that is fierce and memorable – memorable in a ghostly and satanic way. The album Catacombs has been filled with enough darkness that it could be used to outsmart the sun. Darkness that could eat away at every flash of light. But that’s what The Dead XIII are renowned for, keeping the gears of their music black and oiled. And on the new record, they’ve bonded together impressive songs that rattle the bones.

Catacombs opens with “XIII”. It’s harsh and guitar-driven, littered in pessimistic views. It delivers all the needs and plays on insanity. The solo is well worked and showcases the talent that the band clearly possess. Catacombs is blistering and fast-paced, taking influence from many aspects of horror rock, it rises as the chorus digs profoundly into the skin of infectiousness.

“Haunter” is a masterful contribution. The screaming tension intertwines with the expert riff brilliantly, coping well under the weight of the hard-boiled drums. “Lay Siege To Hell” starts with a ferocious guitar blast and the drumming again is hard and fast. The vocals are drenched in spit and rage. “Apothesis” begins with subtlety, and the growls sound painful and harsh. It’s one of the most competent and diverse tracks on the record and it delivers emotion and boundless commitment.

The Dead XIII are certainly an act that plough meaning into their music. The instrumentals are finely-tuned, pride is there, darkness is clearly an aspect, as well as an infusion of harshness and solidified grace. They’re rising quickly and delivering music with an edge and flair.

Check out the song “XIII” here.