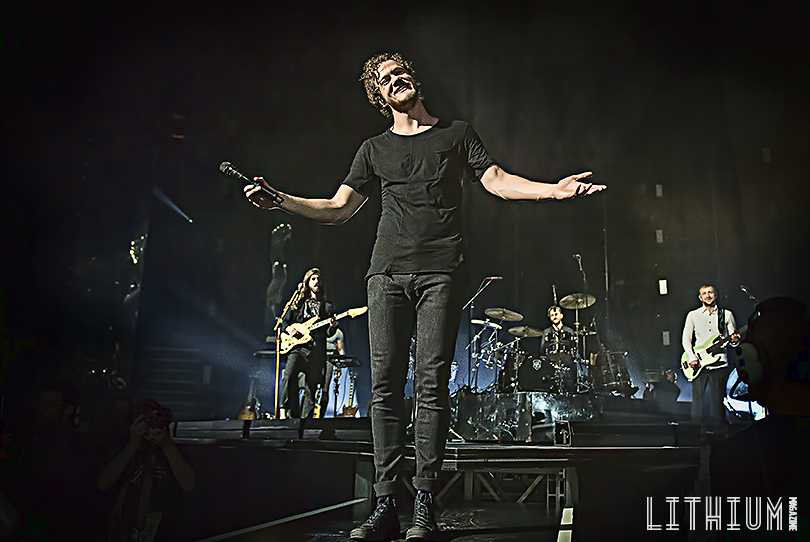 The fourth of July was spent by many Americans celebrating the independence of their country, but in Toronto, we were celebrating for a whole other reason. It was our turn to have Imagine Dragons roll into town on their Smoke and Mirrors Tour. Joining them on this stop of the tour were Halsey and Metric.

First up was Halsey. I hadn’t heard much about her before the concert, so I’m glad I got the chance to see her.  Onto the stage walks this blue-haired, modern Alanis Morrisette, and I was blown away. Halsey is relatively new on the indie rock scene, and as a 20 year-old from New Jersey, she touched a pretty big Canadian crowd. This stop on the tour was her first live performance in Toronto, and she talked a little bit about exploring our city. “I was walking around through Toronto just thinking… Has Drake touched this? Has he sat on this bus stop bench?” Her unique style drew me in immediately; with such a haunting and powerful voice she captivated the audience.  She delivered songs from her new album, including “Ghost”, “Empty Gold”, and “Roman Holiday”. I thoroughly enjoyed her performance, so much so that I downloaded some of her songs right after her set. Definitely, keep an eye out for this girl!

Next up was Canadian rock royalty, Metric. These four really know how to rile up a crowd and make things exciting. (I may be a little biased, but the fact that they’re from Toronto is pretty awesome as well.) Lead singer Emily Haines was having an absolute ball on stage, and it completely showed in her performance and that of her band mates. She also reflected on the band’s success to date, including being asked to go on tour with Imagine Dragons. “You never know when someone’s going to give you that call to give you that shot. Girls, I recommend picking up a guitar. It’s fun.” The band performed some of their bigger songs, including “Stadium Love”, “Breathing Underwater”, “Too Bad So Sad”, and “Help I’m Alive”. Their set was a great lead up to what would follow.

Immediately following Metric, a white curtain draped across the stage.  Clearly, the headliners of the evening wanted to keep their stage set up a secret.   But the mystery and the time spent was well worth the wait.  Out came the group we were all waiting for: Imagine Dragons. These guys know how to consistently bring a great show to the stage, and they did not disappoint on this night. It was absolutely fucking incredible. The four band members were at the top of their game, and it certainly showed in their performance. Between the light effects and the amazing music they were churning out, it made for one hell of a show. Lead singer Dan Reynolds hinted that the band might return again next year, and then announced that the Toronto leg of the tour was the one being filmed for their Smoke and Mirrors Concert DVD.  At this point the crowd went understandably berserk.  It absolutely added to the hype and excitement contained within the Air Canada Centre.

They played some of their best songs including “It’s Time”, “I Bet My Life”, “Demons”, a cover of Alphaville’s “Forever Young”, and wrapping the show up with an incredible rendition of “Radioactive”. I know I keep saying it, but these guys know exactly how to make a crowd go batshit crazy, and keep them on their feet. It was incredible. Out of all the concerts I’ve ever seen over the course of my 22 years of life, this concert is absolutely the best I’ve ever seen. One hundred percent. I have never been to a show that has had such high crowd energy, or that has kept me buzzing about it for days following. It really was an incredibly unique experience.

The Smoke and Mirrors Tour continues in North America until August 1, and then heads international until February 5, 2016. Get to see this tour while you can. I swear, you will not regret it. In fact, I bet my life you won’t.