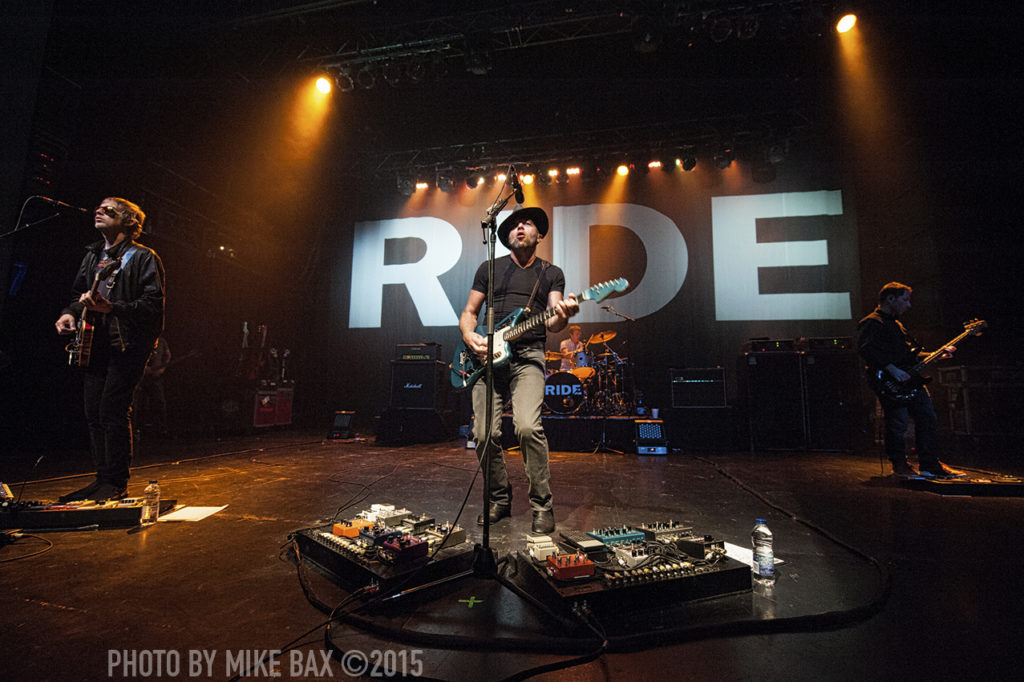 While some might say the definitive shoegaze-era band is My Bloody Valentine, I’d lean a little more towards RIDE myself. Mark Gardener, Andy Bell, Steve Queralt and Laurence Colbert, the Oxford quartet that produced an assortment of EPs and four commercial full length releases of such utterly sterling material, it continues to inspire generations of musicians long after the band’s 1996 break-up.

A somewhat convoluted sequence of musical miracles and mishaps saw all four original members of RIDE open for business in 2014. A massive advertising banner was displayed against some buildings in downtown London bearing the signature RIDE logo, and shortly afterwards reunion shows were announced, all of which sold out at lightning speed (this Toronto performance included).

Back in the day, RIDE was considered one of THE live British bands to see. Their musical prowess and ability to fill a room with their majestic sound is now a thing of lore. Last night at the Danforth Music Hall, this LORE was proven once again. From the magical beginnings of ‘Leave Them All Behind’ through to the band’s signature wall-of-sound crescendo during ‘Drive Blind’, there wasn’t an air of disappointment in the room. The members of RIDE have lost nothing (except maybe their lengthy locks of hair) in the twenty years past, and delivered a magical live show that will keep me smiling for years to come. With no new material to speak of (rumours of new material abound, so there just MAY be a RIDE tour around a new album in the coming year or so) this evening was a veritable ‘best-of’ show. I loved that they kept ‘Black Nite Crash‘ as part of their set-list for this performance. It sounded truly majestic. ‘Twisterella’ and ‘OX4’ were also particularly spellbinding.

The band finished up with ‘Chelsea Girl’ and noodled their way into ‘I Wanna Be Your Dog’ in such a fashion I wasn’t entirely sure they were going to play if for us. Needless worry, really. They delivered the cover as their final track of the evening, and in a fashion only RIDE is capable of; it was perfectly them.

I could wax on for paragraphs about how incredible this evening was. I won’t. All that matters is that RIDE sounded brilliant. And they said, they would be back. Like a Daydream, INDEED!!!

Encore:
Mouse Trap
Chelsea Girl
I Wanna Be Your Dog