The Skinny: HIRAX will release their new album Immortal Legacy tomorrow via SPV/Steamhammer in North America. Starting today, Loudwire is giving fans the chance to hear Immortal Legacy from front to back as they are hosting a stream of the entire album via SoundCloud. Immortal Legacy is available to order on iTunes.

“On our new album we more than ever felt an artistic obligation to our fans to give them a really big-sounding record,” says Katon W. De Pena the vocalist of the American thrash metal act HIRAX. He is referring to Immortal Legacy, the latest release by his band, which – there can be no doubt about, that – will cause a definite stir on the international thrash metal scene. “Our philosophy has always been to remember where we come from and stay true to our roots. Our fans know that we will never let them down and that they have helped to raise us up to a level with bands such as Slayer, Sodom, Kreator, Exodus, Overkill, Testament, Annihilator and many others. This record proves that we are at the top of our game musically!”

The cover of Immortal Legacy was drawn by legendary artist Philip Lawvere (Kreator/Celtic Frost) – his first oil painting in 25 years since coming out of retirement. He is the artist behind such classic album covers as Kreator’s Pleasure To Kill and Celtic Frost’s Emperor’s Return. Lawvere had done stunning illustrations for numerous albums and is best known for a slew of thrash metal offerings released on Noise Records. The HIRAX front man comments: “We couldn’t be happier to have Philip Lawvere illustrating the cover of our new album. After getting Bill Metoyer to produce it, this is truly the icing on the thrash metal cake!” 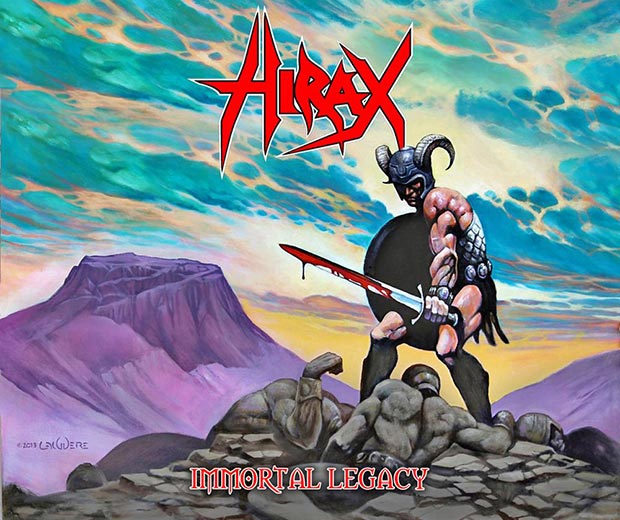