I recently spoke with Gergely Mihály, vocalist and guitarist for the Hungarian experimental grunge/metal band Angertea about their latest release, Nr. 4: Songs Exhaled. The album is chock full of raging tunes and is a must-listen for fans of either genre. Here is how the conversation with Gergely went.

Your latest disc, Nr. 4: Songs Exhaled, was released a few months back, what has been the response to it so far?
Gergő: It has been received quite well, especially in Hungary. A lot of websites wrote about us, and we got 8-10 points in most reviews. This is our fourth album, and I think people know that we didn’t start yesterday, so we’re starting to get respect in many ways. What makes us proud is that our album was recently featured on several well-known Hungarian musicians’ 2012 end-of-year list. Many of these people did influence us as children, and now they like our record. That’s really a good feeling!

Can you tell us a bit about it please?
Gergő: We started working on the songs about one and a half years before we hit the studio, and we also completely finished them before we started recording. The recording process took 4-5 months, while the mixing and mastering was done in one. Everything went according to schedule, with keeping all the deadlines. We managed to do that because we had a quite well built-up plan. There are ten songs on the record, and we feel that this is our most mature work. We didn’t experiment so much this time, and we rather went on making the songs more song-like, and shorter than before. It’s like cutting the fat off the meat, and easier to consume for the general listener. Oh, yes, and there are two guest musicians on the album, which is like a big dream that came true to us: one of them is Bill Gould of Faith No More, who plays the guitar on “No Computation,” and the other is Tibor Rákos of the legendary Hungarian band Eclipse, who sings a bit on “Meeting Satan….”

Check out the song “Lions’ Region”

What is your writing process like?
Gergő: We like jamming a lot! You know, taking loads of beer and whisky to our rehearsal room and playing for hours. We record these jams, and some of the ideas come from them! Besides this, Miguel or I always have some riffs that might work, and we simply build up something from these riffs, or just try to improve them into something more. Otto, our drummer also has some fucked-up, tricky grooves, and many times he has the basic idea of a song, and we play something on his drumming. We always write songs by playing together and discussing everything, and never by sending riffs or songs to each other by email. It’s quite a long process, but this is what works for us.

What is the strangest thing that has happened on tour or at one of your shows?
Gergő: There are some funny stories! We have just toured Hungary and during this tour, after a concert in Budapest, we were invited to a fan-girl’s flat. We were surprised to find that her room was full of big snakes and different reptiles! She encouraged one of the band members to take a snake into his hands, and the snake might have become excited, because it pissed on his whole arm! On the way home the tour bus was totally stinky. Had similar smell as a toad! And another story was during a concert! A fan, very close to the stage, took out his cock and started to piss into the beer glass that he was holding. When it was full, he held it up to show it to us, and then he drank the whole stuff. There are often fights as well. Once, when the crowd disappeared after the gig, we found a really big amount of blood on the floor! Just like at a pig cutting. But fortunately nobody died.

What is the meaning behind the name Angertea?
Gergő: It has a free meaning, and we like to hear different interpretations of it. But what we thought of was mass manipulation! Anger poured into heads by politicians, religious leaders, etc. 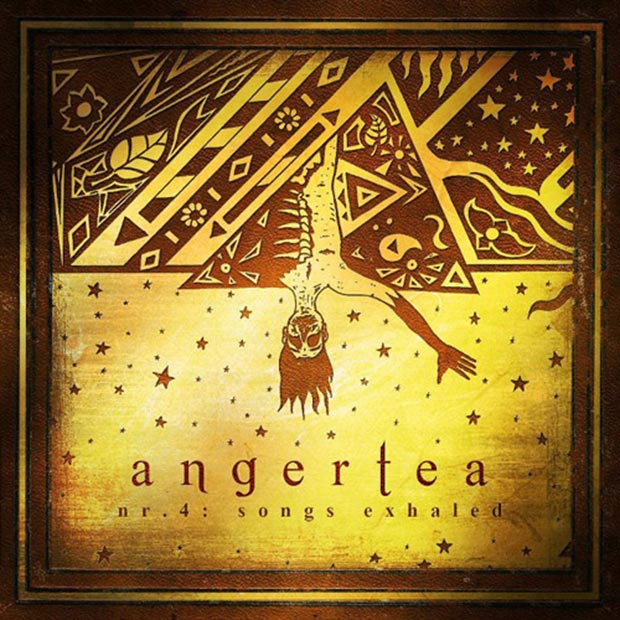 You guys are from Hungary, what is the metal scene like there? Do you receive a good amount of support from the kids and the scene?
Gergő: The underground is very strong here with loads of great bands. The problem is the lack of financial support. Our government does nothing to support music, and for some reason they don’t think of it as an important thing. And without money, no quality can be reached! I’ve heard of several great bands going bankrupt. Our position is quite good here, and even though we are not in the mainstream, our gigs are well-received, and we’ve got our audience. But we are always looking for a bigger one. We want more!

If you were stranded on a desert island and could only have three records for the rest of your life what would they be?
Gergő: Pantera’s Vulgar Display of Power, Tool’s AEnima, and Meshuggah’s Obzen.

What would fans be surprised to find on your iPod?
Gergő: Enya! And I love death metal; bands like Morbid Angel, Cannibal Corpse, and Hate Eternal. But nothing that really sucks could be found on it!

What kind of touring plans do you have in support of the new record? Will you be touring outside of Hungary?
Gergő: We’ve toured in Hungary a lot, so we want get to more European countries! Together with our Norwegian label, we’re planning a Scandinavian tour this year! It’s not too easy, though. Outside of Hungary we’re not a big name yet, and this way, clubs don’t really like taking risks… Maybe the best thing would be the support of a big band, but that costs a lot of money, and our budget is tight. We’ll see!

What is next for Angertea?
Gergő: We’re gonna be featured on the CD compilation of Terrorizer magazine’s March issue! Then, our new video is coming out in days! That’s going be really strange and sexy, with three girls doing weird things. Besides these, we’re shooting two other videos throughout the year, where one of them is going to be a simple image clip with us playing, while the other is something different that we haven’t done before! But let it be a secret! And of course, we are aiming to play as much as possible!