Let’s compare the first half of Guns N’ Roses’ roller coaster-like career with a winning hand in a card game. We have the mega-selling, game-changer Appetite for Destruction (1987) and the twin behemoths Use Your Illusion I & II (1991). Then, stuck in the middle we find their 1988 EP Lies, a sort of well-placed wildcard between a trio of aces. Despite its apparent lesser importance, this EP spawned the now-classic acoustic ballad “Patience” and the polemic track “One In A Million”. It also exemplified to perfection, everything the band was about at the time. This included a previously released faux live recording and a cover artwork that had many things to say, even if they weren’t true. 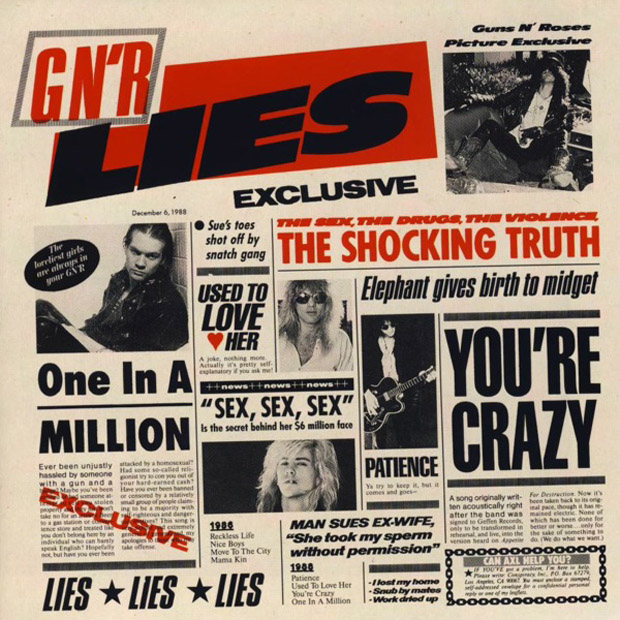 “Personally I wanted it to look even more like the (American tabloid) Enquirer. But it was close enough and there had been enough time spent on it,” says former Guns N’ Roses manager Alan Niven referring to the Lies cover sleeve. Resembling the front page of a gossip tabloid, the artwork was fully dedicated to depict over-the-top stories centered around the band. By then, the consequences of becoming the centre of attention within the music and entertainment industry were taking its toll on the quintet. Ironically, the EP’s cover became a clear representation of the effects of fame on one of America’s quintessential Hard Rock outfits.

The concept, initially envisioned by singer Axl Rose and other group members, was a cautionary comment about the state of the modern media and the disadvantages of becoming a celebrity. “I understood it as being a poke at the media who are more interested in the superficial than the substantial. Things like ‘let’s find out about Axl dating (now ex-wife) Erin Everly instead of being curious as to how his artistic mind worked to form his lyric content”, affirms Niven. “Or, let’s talk about Slash being a drug addict – he continues – rather than acknowledging the skill and personality of his playing. Or, let’s ignore Izzy, despite the fact he was the single most important element that formed the character of the band and its original attitude.” 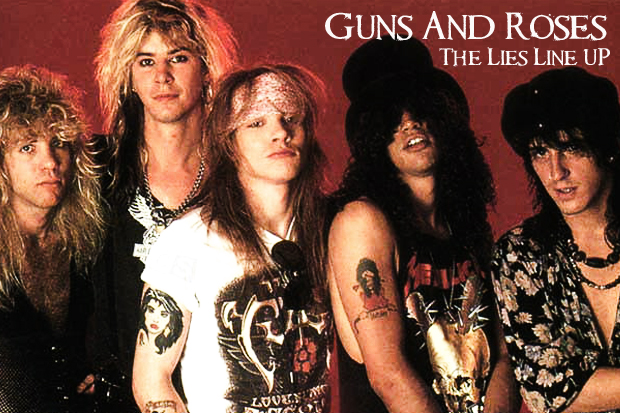 It was precisely from that kind of sensationalistic speculation that both the cover artwork and inside booklet spread began taking form. All kinds of jaw-dropping headlines and insightful mini stories (some of them just referring to the song titles and the recordings’ credits) were brought together as a sort of pulpy newspaper. Among those included were polemic-yet-hilarious things like: “Man Sues Her Wife: She took my sperm without permission”, “Elephant Gives Birth To Midget” or “Gay Vicar In Gang Bang Horror”. “Everyone had fun coming up with those” remembers Niven. “The weirdest came from those hired by Geffen Records to do ‘art direction’!” He probably refers to graphic artists Deborah Norcross and Leslie Wintner who most likely, designed the artwork using a mixture of manual techniques.

Fun aside, some of the proposed ideas proved to be somehow too volatile to be included in all of the album editions – for instance: “Ladies, welcome to the dark ages” and especially, “Wife-beating has been around for 10,000 years”. Eventually both were replaced with less provocative phrases. Alan Niven remembers that “the quips were changed right to the last. Axl has a bit of a hard time letting something go. But the thing about wife beating was something I suggested that, given the volatility of his relationship with Erin, it would be unwise and might well explode in his face later. I think, once he went through the divorce process, he saw in hind sight the good sense I exercised in doing that.” 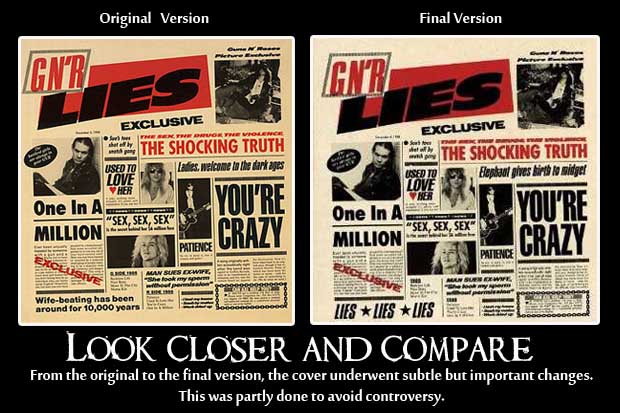 Another reflection of Guns N’ Roses’ unusual antics and overall mischievous personality was the inclusion of the original graphic design and music for the fake live recording “Live ?!*@ Like a Suicide”. Originally released in 1986, it initially served a very specific agenda. As Alan explains: “The demos used were recorded at Pasha Studios and mixed by Hans Peter Huber and myself. We added ‘audience’ to the tracks to create a false ‘live’ recording. ‘Live Like A Suicide’ allowed me to do a lot of preparatory press work prior to the release of Appetite For Destruction and thus ‘set it up’.”

To some extent, the origin of those four ‘live’ songs, although peculiar, isn’t that surprising. What amazes is the tenacity needed to bring back the design and integrate it with the mini-album’s new visual elements. If the main idea behind the Lies cover artwork was to criticize the media’s shady maneuvers, then wasn’t this ambiguous move sort of the opposite? “No”, assures Niven “If that artwork would have done that, it would not have been there. It was our way of copping to the fact that it was a phony live recording used to raise money so as we could get to England, and so as I could do some groundwork as I had done with Indie releases by other bands, Motley, Berlin, Great White, etc….” 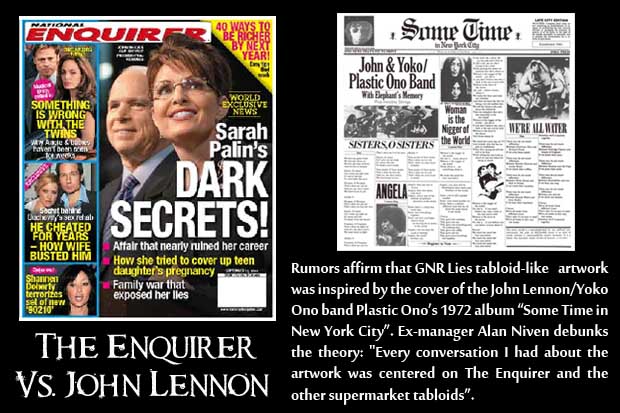 In the end, what really matters about the Lies cover artwork is not how it was produced (digitally or manually), or how much fun and controversy came from every made-up headline. Its meaning is much deeper and intrinsically connected with an undeniable reality: don’t believe all you read or see, especially if related with the world of entertainment. Not every lie ends up being exposed and not every truth finds the light of the day. It’s a message that today more than ever, still resounds within a society seduced by questionable Reality TV shows, bogus press sources and artificial internet avatars. As Alan Niven concludes: “It was good cover, so to speak, and good disinformation… Was it really true?” 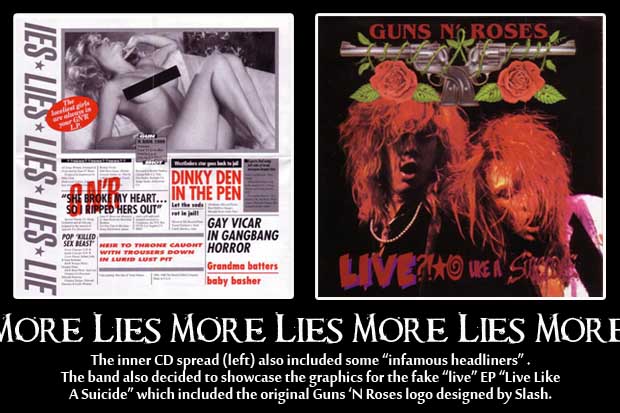 Coming Next Time: Beyond Time And Place: A conversation with artist Paul Raymond Gregory
Previously on AJFA: Cynic’s “Focus” – The Cosmic Marriage Between Progressive Metal and Angelic Art 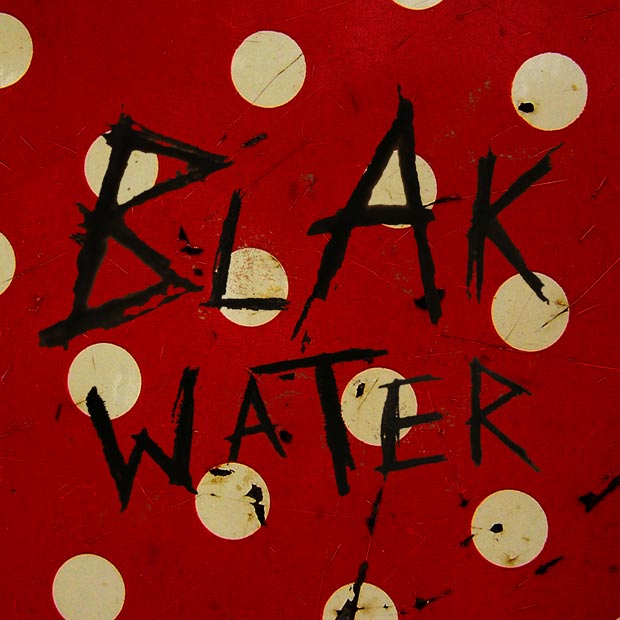 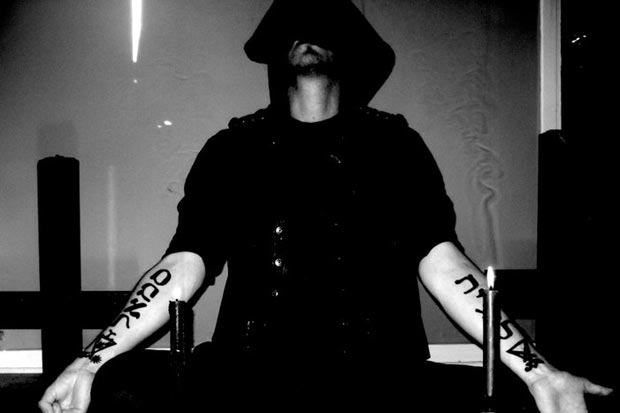