…And Justice For Art: “Beyond Time and Place” – A Conversation with Artist Paul Raymond Gregory

Veteran visual artist Paul Raymond Gregory seems to be one of the busiest personalities in the world of heavy Metal. The British painter and illustrator continues to produce large, detailed canvases based on Tolkien’s literary works and recently completed the cover artwork for Saxon’s upcoming album Sacrifice (his 12th for the band to date). Moreover, he’s preparing the 2013 edition of the popular UK festival “Bloodstock Open Air”, a massive Heavy Metal gathering of bands and fans that Gregory helped to create more than 10 years ago.

On top of all of this, Gregory just published a book titled “Beyond Time And Place” containing 176 glossy, illustrated pages showcasing the artist’s visual works and achievements over the past 35 years of his career. It includes most of his major Tolkien-inspired pieces and many artworks he has produced for bands such as Saxon, Dio, Molly Hatchet, and Blind Guardian among others. A true feast for the eyes, no doubt about it! 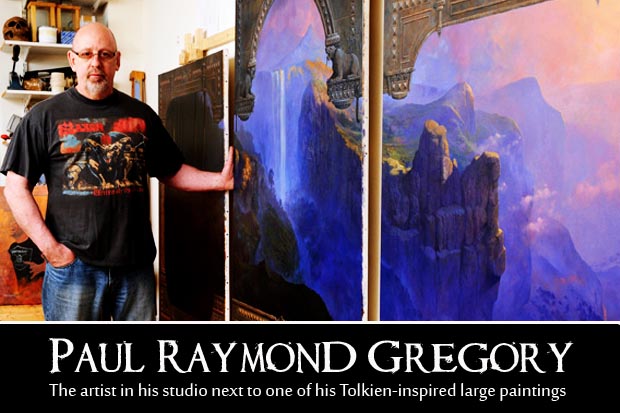 Miraculously, Paul found some free time in his busy schedule to talk to us for PureGrainAudio’s “And Justice For Art” series about his painting career, “Bloodstock 2013”, and of course, his magnificent new book. A conversation for the ages…. Here’s how it went.

How did you get interested in visual arts? Did you ever had formal training?
Paul: Well, I’m thinking back to my youth. I’ve always been an artist; I think I was born an artist. I’ve always drawn and I’ve always painted from a very early age. So it has always been something I felt the need I had to do. I don’t think you can teach people to paint or draw or sing. Is the sort of thing that is either in you or it isn’t. And the direction you take. For me, the greatest thing that any artist can do is to paint something that is in front of you. 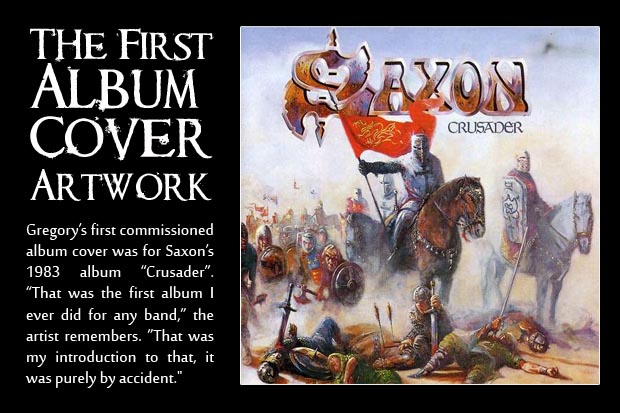 How would you describe your signature visual style?
Paul: I like to think I’m a fantasy artist, but I like to keep it real sort of thing. So if I’m painting a landscape, in my studio from (Tolkien’s) “The Silmarillion”, for me it has to look real. So I’m a sort of realist painter in that respect, you know, I paint from life.

What’s your favorite painting technique?
Paul: Well, I use oils. But sometimes I use a base in acrylics. Acrylics tend to be more an immediate thing. They dry very quickly. But generally speaking I use oils. Sometimes I have to build up my layers so you got like glazers in certain areas. I don’t paint in pasta, I paint thickly.

When and how did you become involved making covers?
Paul: This came from the work I was doing on my Tolkien-inspired work. A picture of my work landed on the desk of Saxon’s manager in 1983 and they liked the artwork. Then they asked me if I could do the cover for the Crusader album and that was the first album I ever did for any band. That was my introduction to that, it was purely by accident. But it is something that I really enjoy. 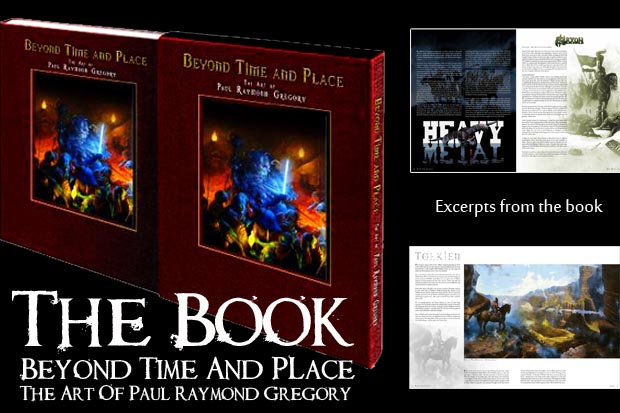 Let’s talk about your awesome book “Beyond Time and Place”. Why did you wait so long to do it? Why now is the best time to publish it?
Paul: Well, this is another bizarre meeting I had about an exhibition I was putting on in London and I had to meet somebody from the British Music Experience which is in London. I was introduced to another artist called Mark Wilkinson, he has done album covers for various artists; Iron Maiden, Judas Priest. We got talking and he had just published his own book and I thought perhaps it’s a good time for me to do mine. So, there’s no other reason to that really, just with the huge body of work and I thought it made sense for me to do that.

Was it difficult to capture more than three decades of work on just 176 pages? Are you satisfied with how it came out?
Paul: I am, yes! I think it has come up really well. It’s not something that I had done before. Visually, it has come out really well, I was really impressed. The book encapsulates pretty much everything I have done in the last 30 years and that is the easiest place to see it, in a book. So for me it is going back in time and is great in that respect and see what you’ve done. It’s quite a mark when you see it all together. 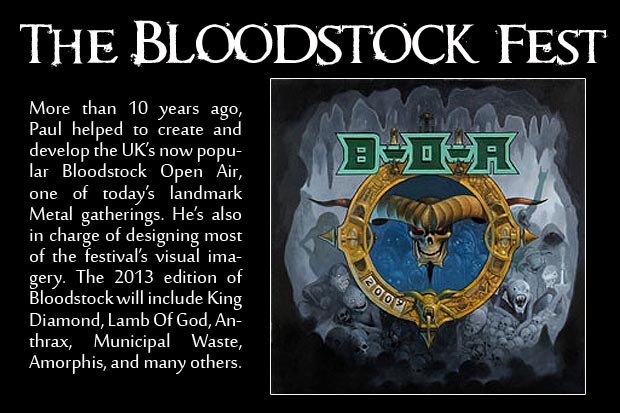 You are the mastermind behind UK‘s “Bloodstock” Metal festival. How did that came to happen?
Paul: It was pretty much by accident. I was looking for somebody to do my website, this is how bizarre it is, and I found this guy, I knew he was a metalhead, and he presented me the idea of putting a festival on. And I said, yeah, great idea, and literally straight away, I didn’t think about it. I think is a natural progression for me as an individual. And I ended up with the festival in the end. It was about four of us that wanted the idea, but it was obviously quite a costly exercise. And eventually it was just me. So I went and developed it from there and I brought my daughters in as directors. But there again, it was purely by accident not by design.

You’ve been working with Saxon and other bands for years. How important is for you to establish a good relationship with the musicians you‘re collaborating with?
Paul: It’s very important. I don’t like working with people that are hard to work with. Saxon are great and they know exactly where they are coming from as a band and for me it has been great to see their work. Have a look at the album covers and the different styles and all the different images that I created for the band. You know, it’s been great for me. And I have to say that about all the bands that I’ve worked with, they all have been friendly. 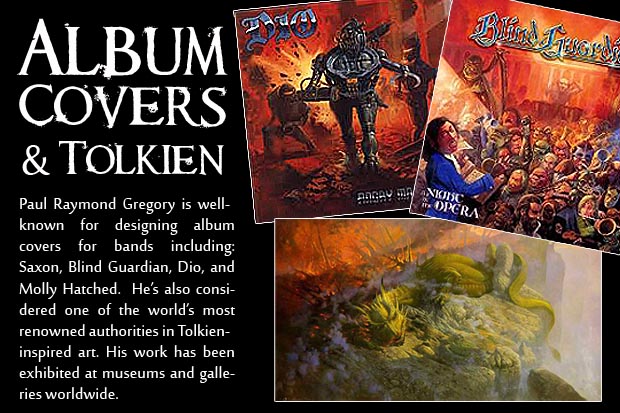 Any favorite painter or painting style?
Paul: Frank Frazeta was a great illustrator I liked his style. I like Dali’s work, because he was a surrealist painter and I’m a big fan of that. And then, goes on and on with painters.

Have you ever used digital techniques to enhance your work or add finishing touches?
Paul: No. I’m afraid that for me computers are for sending emails. Hehe!

Next Time on AJFA: “Motorized” – An Interview with Motorhead’s Longtime Illustrator Joe Petagno
Previously on AJFA: Guns N’ Roses’ “Lies” – Gossips, Tabloids and the Antics of one of Rock N’ Roll’s Wildest Bands