Lynchmada are gearing up for a crazy 2012 and are starting the year off with an Australian tour with Cavalera Conspiracy. The band will be destroying the year with their second album To The Earth released via Truth Inc. Records. Guitarist Cameron Wallace recently gave PureGrainAudio some of his time to tell us about his Engl Fireball 60 Watt Head and how this piece of gear works for him. Read about it below.

What one piece of equipment do you use to obtain your signature sound?
Cameron: There are several pieces of equipment I use to achieve the sound I have, but the main factor would definitely by my Engl Fireball 60 watt head, it just kills.

What about it makes it so important to you?
Cameron: As soon as I tried it out it immediately gave me the sound I’d been searching for for years. A lot of the stuff we play in Lynchmada involves a fair amount of palm muting and chug-type riffing and this amp suits our style perfectly. When I first got it, it seemed not a lot of people were playing Engl amps and I thought that Simon (Lycnhmada’s other guitarist) and I both playing Engls gave us a bit of an angle. Our tones are very complimentary and we’ve had a lot of people come up to us after shows saying how much they love our guitar sounds which is always nice to hear.

What are the major pros and cons?
Cameron: The major pro would be that it has an awesome and distinct tone. It’s only 60 watts so I can still crank it a bit on stage. Of course that gets the tubes a bit hotter which helps unleash the tone a bit. It’s got enough gain to kill a brown dog and I’ve always been a fan of bands that use tons of distortion so this helps me in that department. Unfortunately because the amp has so much gain it can also get a bit noisy. To combat the noise I use a Boss NS-1 noise gate which cleans things up nicely. Also the clean and distortion channels both share the same gain knob so if I want lots of distortion there will be some breakup on my clean sound as well. I can live with that though; I’m not exactly known for my clean fingerpicking…

How long have you used this piece of equipment and would you ever change it?
Cameron: I’ve been using my Engl for about four years now. Right now, I don’t see any reason to change it. I figure why change amps when you know the Germans will probably bring out a Fireball I can stash as on-board luggage soon enough!

Any final thoughts or comments on the gear?
Cameron: I reckon there must be something to be said for German engineering because it’s been around Australia many times now. It’s been rained on, beer spit through it, beat up and still goes like the clappers. Go Engl! 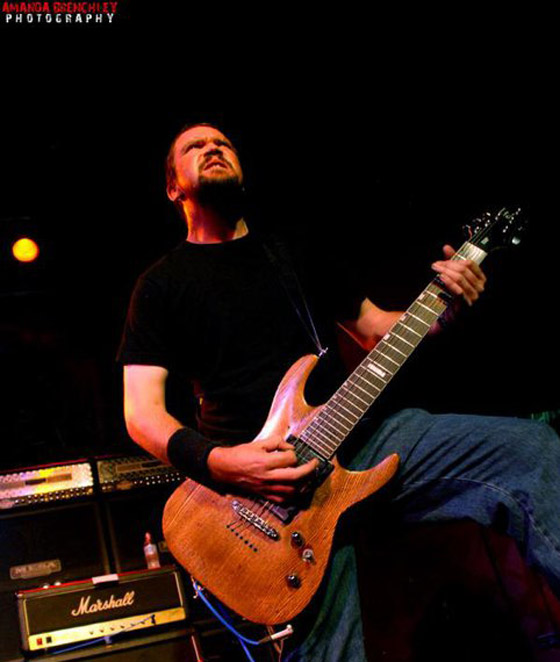 Check out the song: “Earth I Walk”