The Skinny: Shawn Foree grew up in Yuma, Arizona and is the brains behind Digital Leather. Even though the Guinness crew named Yuma the sunniest place on Earth, Shawn unfortunately fell on dark times. Even with the death of a very close friend and other trials and tribulations, Shawn forged ahead in life and music.

Packing up and moving to Berlin was where a huge part of this needed changed occurred. Thankfully, this was also the catalyst that would bring forth the new album, Modern Problems. Shawn recorded the demo for his song “Soup” while in Berlin and the German culture and life notably had a big impact on him. A few months later, with a new-found energy and happiness, Shawn returned to Omaha to work on his new album.

Shawn comments on the new album: “Modern Problems is a narrative of the grieving process. I wanted to explore that universal experience with real ambition, so I created a kind of alter-ego to relate the story of a loss, which is where the record starts: When the protagonist has lost a loved one. It’s easier to be truthful when you write as a character I think. At first, he’s in denial. In “Decoys” he wallows over a past he considers a sham. As the record progresses, he battles with despair and anger, vainly seeks hope. The final acceptance in “Door” comes reluctantly, even bitterly. I kept the music itself upbeat and somewhat simple in order to contrast the heavy topics.”

Digital Leather took their (his) time when writing this new music and allowed for everything to come naturally. Moreover, Shawn recorded 100% of everything on tape, by himself and in his home resulting in a warm medium and an intimate work setting. With “semi-aggressive, bouncy, synthpunk fuzz permeating the tracks”, the music is cohesive and the sound unified. This is an album full of emotion and it’s raw ebb and flow of feelings will ooze from yours speakers and into your heart. 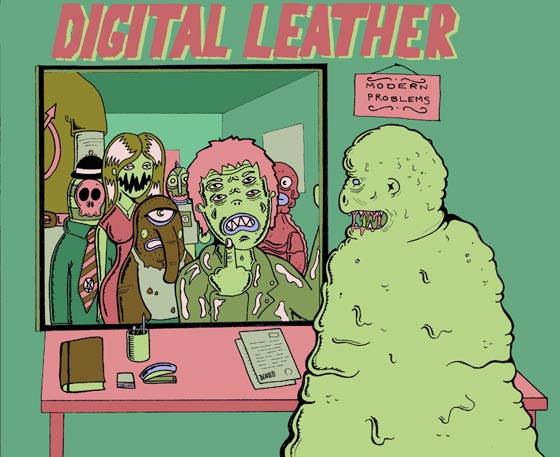