The Skinny: The Silent Rage is a heavy/power metal act hailing from Athens, Greece. The band released a rehearsal demo in October 2006 titled Perished In Flames. Thereafter, the band faced numerous line up changes until September 2009 when they released a self-titled, five track EP with remaining, founding member Nikos Siglidis.

Though more line-up changes ensued, the band persisted and performed as a supporting act to Shadow Gallery’s debut Athens show. Soon thereafter the group began pre-production of their new material. On February 2011 the band entered TSR studios to begin recording a new EP by the name of Harvester Of Souls; which contains three older songs re-arranged by the band plus two new ones. Some gigs and hard work later, the band is again working on new material to be recorded and featured on their upcoming album Inner Scars. 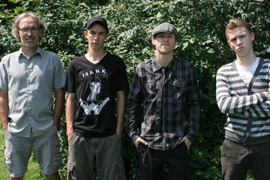