Just before embarking on an eastern Canadian tour, The Junction are unleashing their new music video for their third rocking single off Another Link in the Chain, “Level With Me”. The video was directed by Davin Black, who’s well known work with Bedouin Soundclash, Stereos, and Saint Alvia have garnered great attention. The video has already been added to Much Music and Much More Music in high rotation and is premiering on the AUX TV website today. See it HERE.

On the heels of a very successful year, The Junction are back in writing mode after these upcoming tour dates and will head back in the studio with producer Gus Van Go (The Stills, Hollerado), who also is to credit for the stunning production on Another Link in the Chain.

Catch the band at the Sound Academy in Toronto, on their eastern Canadian tour, or at the Snowboarding World Cup in the upcoming month. 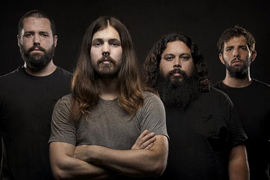