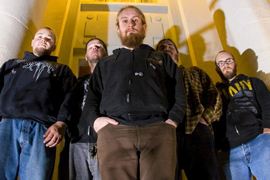 THE FUNERAL PYRE Premiere New Track from ‘Vultures At Dawn’

Los Angeles black metallers, The Funeral Pyre have launched a track from their upcoming album, ‘Vultures At Dawn,’ due out June 8, 2010 at MetalSucks.net. The track is called “Personal Exile” and can be heard at THIS LOCATION.

The Funeral Pyre has also scheduled an album release show at The Blvd, in the Boyle Heights neighborhood of Los Angeles on June 5th. The all ages show will also feature Early Graves, Exhausted Prayer, Bomb Raid, Execution Protocol and more.

The album was recorded by Adam Campbell at Awkward Studios, mixed by Ryan Butler (Landmine Marathon, Misery Index, Phobia) at Arcane Digital and was mastered by Dave Shirk (Incantation, Nile, Today Is The Day) of Sonorous Mastering. Artist Justin Barlett (Sunn0))) Trap Them) contributed the cover and layout.