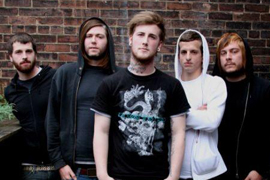 Lineup: Kathleen Turner Overdrive, Shortline Hero, Estate of Grace, The Go Time, In Lights, Of Soldiers And Saints. I got to the Groove Lounge at 5:30, almost an hour after the doors opened and there was no band on stage. All I saw was some equipment set up but no presence of life at the time. Because of this I looked at merch that was being sold.

About 5 minutes of looking at the tables passed and then I heard the live music begin, Of Soldiers And Saints had just gone on stage. I have seen this band before and heard they were going to record a new EP so was interested to see if they have grown as a band. Nothing was different, they were still a hardcore band doing the same thing with the breakdowns and screaming.

After Of Soldiers And Saints, In Lights set up and hit stage. By this time I was actually out of the venue dealing with some personal things. Because of this I am very sorry to the band for missing so I will watch them next time they are playing a show I’m at. Right after In Lights was The Go Time. I was very interested to see this band since it was the new project of Coady McCormack (ex These Silhouettes).

The Go Time really gave it their all. The set was tight and their stage presence was energetic. They got the crowd dancing to their beats and having a good time. It was funny that prior to their set a kid shouted ‘Brokencyde’ a few times because The Go Time definitely had that feel to them. It was sad to see that a fight broke out during their set, with such happy sounding music. Hopefully that won’t happen anymore during this show…

Next was Estate Of Grace stepped up to the plate. It wasn’t long before the crowd was right into the music. A pit opened up where kids hardcore danced for the rest of the night. A good number of fans knew the lyrics to the songs which pumped up the band even more during their set. It was great to see them be able to return to the stage and still have dedicated fans.

Next to the program was Shortline Hero. They set up their equipment and got right to it. Performing their hardcore music and making kids go nuts. Hanging off the rafters’ vocalist John influenced fans to also hang off it having a great time. You could literally feel the energy level in the venue rise to maximum. Shortline Hero always brings on an intense set making kids go wild.

At the end of this set I went over to the bar to have a seat after a hot set and had an ice tea. The bartender was a great guy to talk to about what it’s like to work at a bar. After my delicious beverage I went back up to the stage to see Kathleen Turner Overdrive play their last show. Before they started vocalist Steven Mills became Moses and parted the sea of fans to grab a few things from their merch stand. He came back with a balloon hat and Dollarama bags. He threw out some candy to front row fans and announced how they missed Oshawa.

Right then and there they got right into their sloppy hardcore music performing all six songs from their EP Marauders!Wolves!Scavengers!Party!. The crowd once again were throwing themselves on top of each other at the front of the stage and hardcore dancing in the middle. Halfway through the set they had guitar problems which led to the bassist holding a note for about 10 minutes. When they started back up they got the kids back into it as if no break ever occurred. KTO ended with their best song in my opinion “Gin And Slime”. It was a perfecting closing to their final chapter. They will be missed, RIP Kathleen Turner Overdrive.

After the show as I was walking to my car kids stood outside the venue talking about how great or ‘sick’ the show was. Some went home to possibly listen to the bands on their computers while others went over to The Green Bottle for another show.  [ END ]

Check out the song: “Alas The Wreckage”