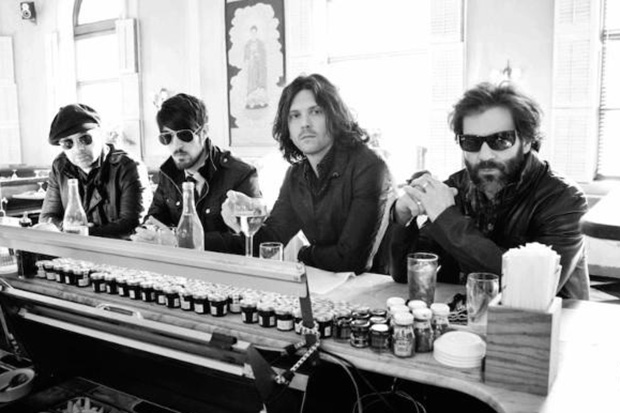 Interview with The Cringe vocalist and guitarist John Cusimano

John Cusimano, the vocalist and guitarist for The Cringe, spoke with me by phone about the band’s newest release Plaything. This is the third release from the band and one that I feel is a bit heavier and a bit more aggressive than its predecessors. This CD definitely rocks. Every track is hook laden and it is easy to imagine just about every tune translating well into a live setting. The record is due out on June 8th and the band plan on hitting the road in support of it this summer. Here is what Cusimano had to say about The Cringe and Plaything.

Your brand new CD, Plaything is set for release on June 8th. Now that it is complete, how do you feel about it? Are you satisfied with the outcome?
John: I am very happy with it. I think it is certainly an album that we spent the most amount of time being picky about. We wrote rewrote and rearranged. We threw things out and added things in and we really collaborated more as a band on this record. We had a significant amount of input on from a good friend of mine whose name is Steve Lillywhite. He is a one of the top producers in all of rock for the last thirty years or so. We caught him in between other projects, he was working with a small Indie band from Ireland, I think they are called U2 or something. We would catch him in between a U2 record and a Phish record and when he had some time. He really spent some quality time with us in the studio to help take things to the next level.

How quick are you in the studio? Can you usually knock things out in a couple takes?
John: Getting the basic tracks down usually does not take that long but it depends on the songs. I would say a good portion of songs on the album are songs that we had performed live before audiences so we kind of knew what we wanted and what we needed to do. It is when you go back and do overdubs and when you start thinking about lyrics and melodies and arrangements that it takes a little bit more time. In addition, we also did this album in a scattershot sort of way. For the last two albums, we went into the studio for like a month and we would basically bang out the album out. For this one we were touring and we were sort of writing the album on the road so we recorded this album when we could over the course of a about a year and a half.

What was the writing process like for this CD? Did you guys all write together? How long did it take?
John: I guess the writing process starts with me writing a bunch of demos. This is a very solitary process for me because I lock myself in a room with my guitar, sing and work on lyrics. Typically, I would go into the studio or use Garage Band to record the basic tracks and then I bring them to the guys in the band. From there it depends but some of the songs change a bit with the others adding their own stuff but the basic song structure is usually the same or similar to the original structure. Other songs we really rearrange them completely by taking bits and pieces from one song and combine them with another song that somebody else had written.

I went back and listened to some of your earlier stuff and to me it seems that Plaything is significantly heavier than your previous two discs. Was this something you were conscious of when writing or is it something that just happened naturally?
John: It was conscious. I wanted to make a heavy record. The last record Tipping Point, while a good record, tended to be a little more brooding and perhaps slower paced. With this record, I really wanted to come out swinging for the fences and make a really good rock record. Our new guitarist Roto grew up listening to Ritchie Blackmore and Led Zeppelin and Aerosmith. He really brought that early 70’s hard rock sensibility to the band and the album.

Are there any tracks on Plaything that are personal favorites or that have good stories behind them?
John: I really like the first single off of the album “No Control.” That was the first song that we recorded a year and a half ago. Another song off of the album that I have really been listening a lot to lately is a song called “Poison.” This is a good example of us sort of Frankenstiening a song together. I came up with the first part of the song, but all I had was this small part and I thought it would end up being just a transitional piece of a song; Roto came up with the middle instrumental section, which sounds totally different from what is at the beginning. What we ended up doing is taking my beginning, Roto’s middle part and then we used my beginning but made it heavier and louder and placed it in after Roto’s part.

Have you listened to any artists recently that have moved you?
John: I love the Foo Fighters, Pearl Jam and all of those bands. I also like Husker Du and The Who as well. I guess more recently I really dig Jack White; I really dig everything he is doing. I also like Queens Of The Stone age too.

How much roadwork do you plan on doing this year?
John: As much as we can. Without even really focusing on touring, we have been doing five to seven gigs a month. I imaging we will be spending a good amount of the summer touring. We are going to start around mid July and we are just gonna be out there doing it.

Any closing words John?
John: Buy Plaything you will not be disappointed.  [ END ]