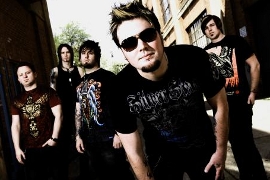 I recently spoke with B. G. Simpson the guitarist for the band Anchored. The band is currently on tour with Saliva in support of their new disc, Listen To This. I found this disc to be refreshing as all of the tracks are solid, melodic, alternative/pop tunes that are quite enjoyable to listen to. Solid musicianship abounds, as does the capability of writing fantastic hook driven, approachable music with universal themes that the listener can easily relate to. Here is what Simpson had to say.

How did Buzzfest go yesterday?
B.J.: It was awesome man. Surprisingly not having a single on the radio, we had a very large crowd that really loved it. We also did a lot of signings so it was really really good.

You guys had to break from the Saliva tour to do this show correct?
B.J.: Yeah we broke for a little bit, we drove down from Maryland to play for the Houston, Texas crowd and we left about 2am last night to make our way to Jacksonville Beach and catch back up with Saliva again. We have about another two weeks left on this tour with them, we have been out since October.

How has the reaction been from the Saliva fans? Are they pretty receptive to you guys and your music?
B.J.: Yeah, very receptive. That was one of the things we were worried about because we play more of a mid-tempo southern rock thing. The Saliva crowds have been really cool and they come and chat with us at our merch booths after every show. The Saliva crowds have been awesome to us.

Now that your brand new disc, Listen To This is complete how do you feel about it and are you satisfied with the outcome?
B.J.: Satisfied, Yes. I love the CD; I think it is a well-rounded CD. I think it is one of those discs that you can take with you if go fishing on a lake or hang out with your friends all day on the beach and listen to it front to back and have a good time. It is a feel good rock album that just makes you want to hang out with your buds and get your asses drunk.

Every band has its musical influences. Who are some of the bands that have inspired you guys?
B.J.: I grew up in the Eighties and Ratt was one of my favorite bands. I have always been a fan of their guitarist Warren DiMartini. I like the Deftones as well but I am more influenced by the eighties bands.

I really enjoy the tune “Dirty In Texas”. It is really catchy.
B.J.: I tell you what. In Houston yesterday we had the whole damn crowd singing that song. It went over really well.

What can fans expect when they pick up a copy of Listen To This?
B.J.: I think it is an album that can be listened to front to back. Every song is good and not every song sounds the same. It has a good party vibe to it and it is really a feel good album. There are some good rockers on there and there are a few ballad type songs on there as well. I think people will just be able to pick up the album and just kick back and enjoy it. People have been digging it and the feedback so far has been overwhelming. It is just a really good Rock album.

What has been the most memorable moment of your career so far?
B.J.: To be honest I would have to say meeting Warren DiMartini from Ratt this last January in Anaheim, California. He was a totally cool guy and is totally down to earth. He sat there and had a beer with me and it was definitely my highlight because I am such a big Ratt fan.

What do the rest of your touring plans look like for 2010?
B.J.: We are planning to stay on the road through November or December. We have something going on in June but it is not confirmed yet. We are not looking to stop until the end of the year.

Any closing words?
B.J.: Give us a shot and check us out. If we are playing in a city near you come and see us; we would love to meet you and have a beer with you.  [ END ]