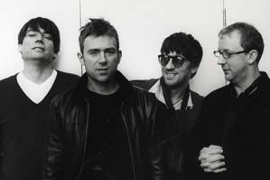 Parlophone Records’ ‘No Distance Left to Run’, a film on the band blur, will have special digital screenings in cinemas worldwide – including select Canadian cities on January 21, 2010 (participating Cineplex Entertainment theatre locations listed below). All Canadian screenings will begin at 7:00 p.m.

The tickets will go on sale for the Canadian screenings on Friday, January 15 via: THIS LINK. You can also go HERE. The world premiere with Blur in attendance will take place at the Odeon West End in London, England on January 14.

The Pulse Films production, directed by Dylan Southern & Will Lovelace and produced by Lucas Ochoa & Thomas Benski, is the story of Blur told in the band’s own words, and is being distributed exclusively in digital cinema by Arts Alliance Media. A trailer for the film is already showing on blur.co.uk, where fans can also find up to the minute confirmed cinema listings and links to book tickets.

The film finds Graham Coxon, Damon Albarn, Alex James and Dave Rowntree set to perform together for the first time in nine years. Intimate new interviews recount the highs and lows of Blur: from Colchester, throughout the heady Britpop years and the band’s headline return at Glastonbury and Hyde Park.

Arts Alliance Media’s CEO Howard Kiedaisch commented “Seeing this film in flawless digital cinema quality and on the big screen is going to be a fantastic experience and will allow people to immerse themselves in the story of blur. We’re sure fans are going to snap up tickets to these limited screenings.”

Stefan Demetriou, VP Visual Content Strategy EMI commented “This is the definitive film about blur and we’re really excited about giving their fans the chance to see it on cinema screens worldwide’.

Jamie Clark, Head of Music, Pulse Films added “At Pulse, we are committed to delivering high-quality and entertaining content across all platforms. With our first feature film we can now add a further string to our bow; we see this as the first of many such projects to come out of Pulse. Blur are one of the most iconic bands of the last two decades, and we are delighted to have the opportunity to work with them”.