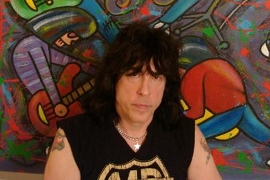 Marky Ramones Blitzkrieg will embark on travels to New England to perform four exclusive shows. On 2/11 in Uncasville, CT, Marky Ramone and crew will perform a free show to the public – Doors @ 7pm. On 2/12 in Londonderry, NH and 2/13 in Scituate, MA the audience will get an up-close and personal view of the legendary drummer while they slam out Ramones hits and more. These dates will include a special meet & greet session. Finally the shows wrap up on Valentine’s Day 2/14 at the Tupelo Music Hall in Salisbury, MA, another intimate setting.

All shows will showcase Marky Ramones Blitzkrieg’s new song “When We Were Angels” that was recorded with Michale Graves (ex-Misfits). This can be exclusively downloaded on iTunes – The new song made its debut on Matt Pinfield and Leslie Fram’s morning show in NYC last week. Marky has also been playing the song on his radio show Marky Ramone’s Punk Rock Blitzkrieg.

Marky Ramone is best known for the 15 years he spent drumming for the legendary Ramones. Marky appeared in the cult classic film “Rock n Roll High School” in 1979, performed over 1700 shows and recorded over 15 albums (studio, live) with the Ramones. In 2002, Marky and his bandmates became the first punk rock ensemble to be inducted into the Rock and Roll Hall of Fame.

Six years and going strong, Marky’s radio show on Sirius/XM Satellite Radio was rated the #2 show on the Faction channel in 2009. Also appearing on various T.V. shows (including Anthony Bourdain’s “No Reservations’ and IFC’s ZROCK). Marky shows no signs of slowing down as he continues to tour the world with his new band Marky Ramones Blitzkreig, with friends Michale Graves (ex-Misfits) on vocals, Alex Kane (guitar), Clare B (bass). The band plays all the classics that lead to Marky’s induction into the Rock n’ Roll Hall of Fame!