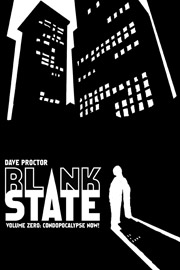 I’ve never done a book review before, so this was quite the adventure. What better place to start than with local author, Dave Proctor. Dave is from Markham, we went to the same high school and I met him a couple times prior to reading this book, which happens to be his first release. He used to play in a band called The Atomic Drops, among others I’m sure, but this was the first time I met him. The Atomic Drops also featured Shamus and Pat Mathers of Hostage Life, whom parted ways in late 2009.

But I digress; I was told by an outside source that book reviews are only done on the first few chapters, usually between the first three or five chapters as to not give away the ending. I intended on writing this review after reading the first few chapters; however, it didn’t end up happening. I picked up the book and after reading all 80 pages in but a few hours, I realized what I had done. You’ll notice at that end of the book the chapters become really short, two to a page at some points.

The book is short, 80 pages, but I, along with many of my friends, thoroughly enjoyed the read. Mr. Proctor has mentioned that the next one will be longer and I am anticipating its arrival. Dave, hurry up dude! The book is about Toronto, if everyone aside from artists of all types moved out due to a crash in the real estate market. The main characters are filmmakers and document the majority of what is going on. There is a map provided in both the front and back inside covers; however, many Toronto locations are mentioned that would not be known to anyone whom does not frequent the city I call home. A lot is left to the imagination which is a plus or minus depending on how you look at it.

In any case, the first three chapters are a little bit chaotic in the sense that I had a hard time grasping the story; maybe I’m just used to the sci-fi novels which fill up my bookshelves. Nerd, I know. Once chapter four hit, Dave’s writing flowed more easily into my mind and imagination. I definitely dig his writing style, though his writing remained very fast-paced and chaotic, a good representation of the state Toronto is in throughout the book. He’ll say something, and will explain it within the next page or so. For example, at one point the main character states the title of the film he is making, “Writers are Stupid”. Within the next few paragraphs the main character’s friend yells the statement which, as explained, would become the title.

Wooden Rocket Press is a new publishing, er, firm? And they scored huge on this one, definitely picked the right book for their first launch, no pun intended. I was extremely impressed when I noticed the book on the shelves of the Indigo bookstore as I was doing some shopping over the holidays. Definitely check out this book if you’re an artist of any kind, or even just an avid reader.