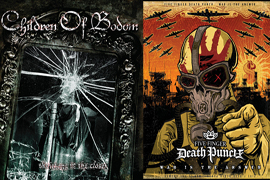 Brief Bio: Children of Bodom hit The Sound Academy in Toronto on September 25th, and make sure to check out The Governor’s Ball: The “Mighty” Metal and Comedy Show, now podcasting. Skeletons in the Closet is a cover album released earlier as its announced date was in September 22, 2009. It features covers done in previous albums as well as new ones. Some of the artists include Suicidal Tendencies, Alice Cooper, Slayer, Andrew WK, and more. Five Finger Death Punch was formed in 2005 by guitarist Zoltan Bathory (formerly of U.P.O.). Bathory named the band after the lethal blow from Kill Bill Vol. 2. Other members recruited to the band include former Motograter & Ghost Machine vocalist Ivan Moody, former W.A.S.P. drummer Jeremy Spencer, former Anubis Rising/Deadsett bassist Matt Snell, and Jason Hook. The band recently announced that their second album, War Is The Answer, will be released September 22, 2009. The CD is co-produced by Kevin Churko (Ozzy) and mixed by Randy Staub (Metallica, Stone Sour). The first single off the album, “Hard To See”, is getting radio play and is available for purchase through Amazon.com and iTunes music store.  [ END ]

Prizing:
The Governor’s Ball, PureGrainAudio, and Universal music are proud to bring you a most mighty contest. Enter for your chance to win powerful prizes from Children of Bodom and Five Finger Death Punch. Prize-pack includes a Children of Bodom t-shirt, a copy of their latest release Skeletons in the Closet, a copy of Five Finger Death Punch’s latest War Is The Answer, and posters from both bands. Get entering!