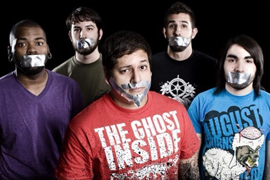 Brief Bio: Although still fresh out of Arizona music scene’s blazing oven, Before You Fled has been stirring up heat on stage and in the studios long before the creation of the band. Their burning desire to give fans what they want while simultaneously standing up for what they believe in will most certainly lead to a successful career. Before You Fled has already seen their hard work rewarded through various opportunities performing along side national acts such as A Day to Remember and Haste the Day, as well as popular local acts: Bless the Fall, Greeley Estates, The Word Alive, etc. Before fleeing the seemingly stale hardcore scene, be sure to keep an eye out for Before You Fled’s new photos, MySpace layout, and EP over the next few months. In the meantime, freshen up your music library with their first release “Forever Ends Today” (for fans of Parkway Drive & August Burns Red) produced by Dan Parker of A Change of Pace.  [ END ]

Prizing:
ONE (1) lucky fan will win a free signed EP and signed t-shirt. ONE (1) runner-up will also win a copy of the EP. Best of luck!