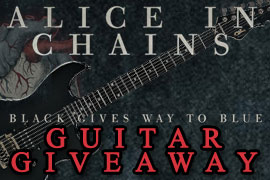 Brief Bio: In late summer of 2008, at the suggestion of longtime friend/Foo Fighters frontman Dave Grohl, Alice In Chains met with producer Nick Raskulinecz to talk about the possibility of collaborating on a new album. “I went to the studio where they’d been working on demos,” recalls the producer, whose credits include Foo Fighters, Rush, Deftones. “We stayed outside and just talked for a couple of hours. After the ice was broken, they brought me inside to hear some music. The first track started playing and I was immediately hooked—the riff was so killer, so catchy and so heavy, and when the vocals kicked in, I looked at Jerry (Cantrell, Alice In Chains’ guitarist/vocalist) and said, ‘I don’t need to hear anything else—I’m in.’ I was just blown away.” By early fall, the band and producer had hunkered down at Grohl’s Studio 606 in Northridge, CA, and were hard at work on Alice In Chains’ first new studio release in more than 10 years. Production eventually moved to the famed Henson Studios in Hollywood, and by spring of 2009 the band emerged with 11 electrifying songs about faith and perseverance. They titled the album Black Gives Way To Blue after the song of the same name, a heart-stirring tribute to Layne Staley, their brother and vocalist who passed away in 2002. “I’m really proud of that song,” says Cantrell, who sings on the track (and shares lead vocal duties throughout the record). “It’s about facing up to the bad stuff and continuing to walk forward and live a life.”  [ END ]

Prizing:
To celebrate the release of Black Gives Way To Blue, Alice In Chains and PureGrainAudio are giving one lucky fan a chance to rock out with a brand new guitar. Enter now for your chance to win a G&L Rampage Jerry Cantrell Signature model signed by the band. SWEET!