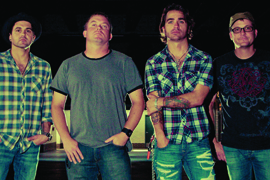 Brief Bio: Cross Canadian Ragweed has just released their new album, Happiness and All the Other Things, and has been spreading their intoxicating blend of rock and Americana on the road. Hailing from Yukon, Oklahoma, the quartet has been a staple of the live circuit since their start in the late 1990s. Although not a household name in the mainstream rock world yet, Cross Canadian Ragweed have already built a huge and loyal fanbase through their gritty live shows. They’ve also long-been celebrated by the music press with USA Today gushing, “This ferociously rocking band is one of the better-kept secrets around…As usual, their best stuff is so good you wonder why more people aren’t noticing…” Happiness and All the Other Things is Cross Canadian Ragweed’s 7th album and was produced by the band’s longtime compatriot and artist in his own right Mike McClure. And, yes, being from a small town in Oklahoma and two of them now residing in the Lone Star State (where they are kings of the thriving Red Dirt/Texas music scene), Cross Canadian Ragweed also qualify as country, and have even played The Grand Ole Opry. It’s only natural, part of the musical heritage that the members of the band grew up on.  [ END ]

Prizing:
ONE (1) lucky fan will win a free copy of the new album Happiness and All the Other Things and a t-shirt. Good luck!