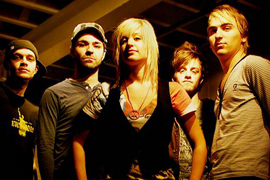 Interview with Kelsey and the Chaos vocalist Kelsey Merritt

Kelsey and the Chaos. It’s a pretty appropriate name for a band whose career has yet to calm down. Having only been together for just about one year now, they have already accomplished a lot of things that most bands don’t see until years into their existence. Their debut EP Against the Wall is completely brimming with tight, infectious songs that will have you singing in the shower and humming throughout your day. And head-banging a little bit too. Here, leading lady Kelsey Merritt tells us about how the band’s been reacting to everything that’s been going on and where they hope to see themselves in the future.

So you guys are currently touring and you’ll be getting ready for your second run on Warped Tour this summer. How big of a role has touring played in your pretty rapid success?
Kelsey: It’s played a pretty big role in our success so far. We’ve only been a band for a year and we’ve done tours with well known bands such as Just Surrender, Red Car Wire, Patent Pending and right now, Forever the Sickest Kids among others. Being able to play to a new fan base every night helps.

What was it like when you guys heard that you were one of the Alternative Press Top 100 Bands to Watch in 2009?
Kelsey: It was incredibly exciting. That list is very lucrative and not easy to get on. We were also really pleased with their write up about us.

Was there anything specific that was said that got you guys really excited or proud or just made you think, “Wow”?
Kelsey: The thing that made us most excited was the fact they compared us to Jimmy Eat World because they are such an amazing band and we like them a lot.

I’ve read a bunch of times about how Dashboard Confessional’s Chris Carrabba raved about you guys when you played on MTV2. How did it feel to hear that from someone who has already had so much success?
Kelsey: It was a huge honour to play for Chris and to hear his feedback. He is truly one of the most down to earth musicians we’ve met so far. His praise made us feel good about what we are doing as a band.

And it seems like the list of achievements goes on and on from there! And this is all in just over a year. Has it been a crazy ride?
Kelsey: It has been a very wild ride. It seems like as soon as something big happens for us we hardly have time to enjoy it before we’re on to something else. We’re so lucky and fortunate to have so many great opportunities.

What do you consider your biggest accomplishment as a band so far?
Kelsey: Either playing for the MTV2 Rock Band contest or getting on our current tour with Forever the Sickest Kids.

What is it about those things that make them so important to you guys?
Kelsey: Definitely the amount of exposure we’ve gotten.

Things to seem to have happened really quickly for you guys, so I would think that you would have been involved in music since before Kelsey and the Chaos. What was everyone doing before and what brought everyone together?
Kelsey: We were all playing in bands prior to Kelsey and the Chaos. A few of us were also in school. We either met at school or through the internet – a combination of both.

I’ve also heard of you guys being compared to other female-fronted bands like Paramore. Does that bother you at all?
Kelsey: It definitely doesn’t bother us. We are honoured to be categorized in their same pool. However, we set ourselves apart by just being ourselves. We love the 80’s especially Pat Benatar and Joan Jett!

What are the plans once you’ve wrapped up your dates on Warped?
Kelsey: We will continue to tour and write for our upcoming album.

Are there any tours lined up for the end of the summer yet, then?
Kelsey: Nothing has been confirmed just yet but we are working on it.

Have you already started writing for the next album? Is it currently in the works?
Kelsey: We are in the beginning stages of writing for our upcoming release. Should be out by the Fall of 2009.

What do you hope your next big accomplishment will be?
Kelsey: Hopefully becoming a house hold name! Why not aim high?

So this is where Kelsey and the Chaos are after about just one year. Where do you see the band in another five years?
Kelsey: In a year we hope to have a full length record and be playing more big tours! In five years, we’d all like to be monetarily comfortable and on the cover of Rolling Stone or Alternative Press!  [ END ]