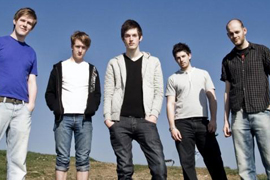 UK Hardcore act, Though Solace have recently released their latest disc, The World On Standby, on Strike First Records. Taking influences from bands such as Underoath and Shai Halud and their own unique sound, Through Solace has constructed a CD that fans of the hardcore genre will not want to miss. Brutal in its delivery yet full of inspirational themes and lyrics, this is one heck of a disc. I recently spoke with vocalist Luke Nicholas about the band and their new CD, The World On Standby.

Different groups have unique ways of writing their songs. How do you guys go about writing your music? Is it a collective effort or is it more the efforts of one particular member of the band?
Luke: It is definitely a collective effort but certain band members will lead the way with the early ideas for a song, then we will all build it up together. We try and write constantly, so even when we already have just released something we will have already started on the next song.

Every band has its musical influences. What are some of the other bands and artists that have greatly influenced you guys and your music?
Luke: I can say that we have a very wide range of influences and I think that is one of our strong points. Everybody seems to have their own specific inspiration but our sound is molded to an extent by bands like Beloved, Thrice, Life In Your Way, Strongarm, Underoath, Shai Hulud etc, although we are also influenced by many bands that are not particularly heavy, and by a lot of films and film music funnily enough.

The name of the band Through Solace is interesting to say the least and sounds as if there is a story behind it. Where did the name come from and what is the story?
Luke: Our former bassist thought up the name maybe four years ago now, it did not have a story at all! But in the years since then the meaning of the word ‘solace’ has been linked into our music. It apparently means “something that gives comfort, consolation or relief,” for us it is a spiritual meaning. So the music is consoling us and hopefully the people that listen to it.

Now that your new CD The World On Standby is complete, how do you feel about it? Are you satisfied with the outcome?
Luke: We are extremely happy with how The World On Standby came out. We saw the album as a challenge rather than an enjoyment – although that’s not to say we didn’t enjoy recording it, we actually loved it – because we had a set amount of time and limited resources, and also the process of writing the second half of the album was only a matter of weeks rather than months. The fact it does not sound rushed and that it meets our expectations, has made us really happy with it.

How has MySpace and the internet impacted your band and do you think downloading helps or hinders the artists?
Luke: As time has gone on the internet has become central to our band in networking with people and communicating. Downloading is ultimately a hindrance to artists but we have to accept it. I think it is a change in culture that we have to live with and adapt to. Bands have to earn the loyalty of people so that they will support the band financially. Likewise, for labels, it is difficult for them but some labels will earn the respect so that people still buy the music. I can honestly say we do not mind people downloading our music but that the best way to support us is to buy a CD or some merch rather than downloading mp3s.

It is good to see a number of bands breaking away from the usual gore/horror, misogynist and anti-religious themes. What prompted you to pursue this specific course in lyrical concept?
Luke: When we formed the band, we knew we had a purpose beyond usual meaningless themes. I do not see the point in wasting time being false or wasting my time talking about religion. We are just lyrically honest about life, faith and needing help to overcome things. We use the themes like the planets and astronomy in The World On Standby to put this across. I said before we are also heavily influenced by films, so there are lyrical themes based on certain films that can be related to life.

The artwork is quite amazing. How is it tied to the albums title?
Luke: The art is by Dave Quiggle and one of our dreams was to work with him. It is directly tied to the album’s title because I explained to Dave what it meant, and he came up with it. It is supposed to represent the world, which can be the planet itself, your own personal life or worldly things coming to a standstill, and using that to search for a meaning. At the same time, we were just as interested in having artwork that looked good!

How do you maintain that level of energy and exuberance? You sound like you are ready to go full bore every time you play.
Luke: It takes a lot out of us to play a live set. We are mostly driven by emotion. I can only speak for myself, but shouting the words is sometimes a huge effort because they are having an effect on me. Whatever we do is just a natural expression.

What song from the CD album is the most exciting for you to sing?
Luke: It is really difficult to choose any one song but “Through These Years” is good to perform live because I enjoy the lines on it and Rob also sings his parts.

You guys have put a different spin on the whole metal scene. In a genre known for dark and often demonic themes, you have done the exact opposite, adding spiritual even religious themes. Do you think this will sit well with fans of the genre? Has there been any backlash from the Metal community? What about backlash from the religious community?
Luke: Good question, we do not really have much weight in the metal scene, whereas having a background in hardcore it is accepted that we should express our views, whatever they may be. I honestly think if people like the music then at best they will be open and respectful to lyrics that are unusual or at worst, they will not notice them. There has not been any backlash really. Only narrow-minded people would get wound up about things like that. I do not think any specific scene will have an opinion; there can be closed minds amongst fans of heavy music or amongst religious people. We try to do our thing and just be positive about it.

What is it that gives you inspiration when writing lyrics and was there a theme behind the writing of this record?
Luke: The whole of The World On Standby is a theme, in several of the songs that title is mentioned. It is hard to write down what it fully means because it is an ongoing theme that covers a load of aspects of life. I already mentioned in another question about the world standing still. It kind of means that the world is not fully awake yet, that it is waiting to be brought to life and everyone is searching in their own way for a meaning out of this. Individually the songs all talk about different things, but sometimes they keep coming back to this original idea.

What is next for Through Solace?
Luke: This album has been exactly what we need to give us a sense of direction. We want to promote it as much as possible and are touring this summer with It Prevails, which will be our biggest tour yet. After that, we are building our profile in the UK and Europe before hopefully returning to North America in early 2010. While this is going on, we have already started writing our next record and might put out demos at some point during the year. If any US bands reading this want to take us out in 2010 get in touch.  [ END ]