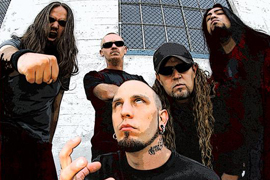 “Pave the Way was an important album title for us. We chose it because we are not going to compromise ourselves and our creativity to follow the pack. We’re going to stay true and try to follow our dreams with metal” – Travis Johnson, Flatline vocalist. Heavy Metal act Flatline has been extremely busy lately. With the February release of their latest disc, Pave The Way the band is now preparing to hit the road. They have shared the stage with God Forbid, Toured New Zealand, and played the “666 – Metal Day Out Festival” and they are heading out this summer with Crytopsy. I recently caught up with the bands drummer, Tim Hassemer and spoke with him about the band and their new release, Pave The Way.

Many of your songs are so hard and intense that I am sure they translate well into a live setting taking on a whole new life in front of a live audience. How does it make you feel when the emotion and power that you envisioned in the recording studio, come to life while playing in front of a crowd?
Tim: It is AWESOME! That is why we do it.

Every band has its musical influences. What are some of the other bands and artists that have greatly influenced you guys and your music?
Tim: Slayer, Lamb of God, Pantera, Metallica, Bon Jovi, and Kiss.

Now that you new CD, Pave the Way, is complete how do you feel about it? Are you satisfied with the outcome?
Tim: I think it turned out great! That is just my opinion and you might get a different answer if you asked one of the other guys, but I could not ask for anything else.

You guys have shared the stage with big name acts such as 36 Crazy Fists, Becoming the Archetype and Five Finger Death Punch. What was the reaction of the fans and were you intimidated at all sharing the stage with those acts?
Tim: I would say 93% of the crowd reaction was awesome, and they loved us, but everyone has a bad show here and there. We only had a few bottles thrown at us if that is what you are asking. Nothing intimidates us!

Playing such visceral music in a recording studio must be vastly different than at one of your chaotic live shows. How did the recording process go for your debut album Pave the Way?
Tim: Yes, live shows and studio recording is completely different. Some of it was smooth, and other parts of it were a goddamn train wreck! It is a really slow process, and everyone just wants to get it over with as fast as possible. We got through it without killing each other, and that is all that matters.

Give us some insight into the album lyrically. This is a super pissed off sounding record.
Tim: Ya, it sounds pretty pissed off, I am not really sure though, I never read the lyrics.

What is the hardest part about being in a touring metal band and what is the biggest obstacle your band faces?
Tim: The hardest part for me is being away from my family for long periods of time. That is also part of the obstacles that we go through as a band cause by the end of a tour everyone is homesick and cannot stand the site of each other. Oh, and deciding who’s turn it is to drive can be a huge obstacle as well.

What can fans expect when they pick up a copy of Pave the Way?
Tim: METAL!

When you are on the road for a while I am sure you see and experience many different things you might not even have known existed. Are there any stories that stand out in your mind as being exceptionally strange or odd?
Tim: There is this place in Wyoming… or South Dakota… or somewhere around there. Google it. Anyway, it is called Wall Drug. This is one of the oddest places I have seen on the road. It is an entire town of gift shops that sell things about… well, Wall Drug. A tourist attraction, with no real attraction, other than the Buffalo burgers and the 7-foot Jackelope. Definitely worth checking out, if you are ever in the area.

What is the one thing you travel with that you just cannot live without?
Tim: BEER!!!! Oh, and tough acting Tinactin.

All of that passion that you play with must be tough on you physically. How do you prepare for the physical demands of a tour?
Tim: It is not really physically demanding. We sit around A LOT! We eat like crap. The only thing we really do to prepare for a tour is to practice as much as we can before we leave.

What does the future hold for you guys as a band?
Tim: We have a tour coming up in mid May. We have some headlining dates out to the east coast, where we meet up with Threat Signal and The Agonist. See our MySpace page for dates. Then we tour with them until the middle of June. After that, we plan to take over the entire world, with the help of Stand And Deliver Records and No Fear!  [ END ]