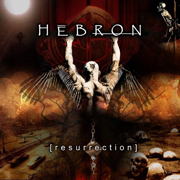 With the release of their latest disc, Resurrection, extreme metalers, Hebron have created a solid foundation of heavy-as-hell songs. Hebron may not have fashioned anything innovative or revolutionary, but they have put together a succession of rock-solid songs that display their talent for composing quality, albeit heavy as hell, metal that fans of extreme music should find more than satisfying to listen to.

The CD gets things quickly started with the band launching into a wicked assault on the tune, “Reformed,” a characteristic dark metal sound mixed in with a bit of hardcore. Hebron effectively brings together grueling guitars, booming drums and nerve-racking, throat-rupturing vocals that do not let up until the very last track, “Resurrection.” Sandwiched between are eight other classic metal tracks that are violent and visceral and will leave the listener pleading for more.

Other notable tracks on this CD include “In The Name Of War,” which as far as I am concerned, is undoubtedly one of the heaviest of the ten tracks and also my personal favorite because it includes a very cool harmonic, at times melodic, dual guitar attack that really showcases the bands musical chops.

Bottom-line, Resurrection is a solid release and one that will hold it’s own amongst the others in the extreme metal scene and should garner the band a quite bit of attention. This is unconditionally a band that is heading for bigger and better things. Keep your eyes out for them.  [ END ]