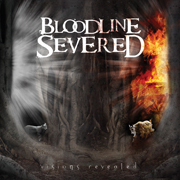 Visions Revealed is the debut CD for Bombworks Recording artists Bloodline Severed and man, let me tell you, this is one hell of a disc. As I have mentioned in reviews I have done in the past I am not the biggest fan of what I would call extreme metal. I love the Metalcore and Thrash Genres and I have been known to dig a few Death Metal or Black Metal releases. The more extreme stuff often times grates on my nerves, especially if it is non-stop growling and pounding with no variety, Basically, I don’t mind brutal assaults but I prefer there to be some depth and substance to my music rather than just over driven noise.

Visions Revealed fits this bill perfectly, because while it is a full on balls to the wall assault that any fan of extreme music would dig, it still offers more, much more. The disc is packed with melodic yet blistering guitar parts that left me quite amazed. A very good example of this can be found in the tune, “Silhouette Of Doubt,” which just so happens to be one of my favorite tracks on the disc.

Another aspect that I really like about this CD is what I feel is a successful blending of genres. At times Visions Revealed has the feel of a Death Metal or Black Metal Record and at times, it even has the feel of a Nu-Metal record. I think the incorporation of a clean vocal line works really well offsetting the guttural growls that frequent this disc as well.

I really dig this disc and what these guys have created, it is quite stellar and I feel comfortable recommending it without reservations.  [ END ]

01. Into The Beginning
02. Reborn
03. A Vision Revealed
04. Silhouette Of Doubt
05. Inception Of Perspicacity
06. Coalition
07. Internal Battles With External Consequences
08. Solemn Goodbye
09. Fear Of Reality
10. Mirror The Reflection
11. Once Empty