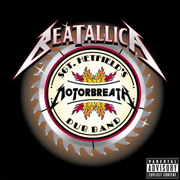 A long time ago, I got together with a few friends and we formed a Metallica cover band. We were pretty good, but our original material either reeked of Metallica or completely sucked. That being said, if there’s something that I get tired of quickly, it’s bad cover bands. Some of them are all right, but most just give off the vibe of a bunch of good players who aren’t interested in writing their own material. With their album Sgt. Hetfield’s Motorbreath Pub Band, Beatallica takes that notion and throws it right out the window.

I have to say, I was particularly impressed with these guys’ playing abilities. The name says it all – they play Beatles songs, but mash them up with Metallica songs. But they’re oh so much better than that. At times, they simply play the song in an extremely close reproduction of Metallica’s style, but never stealing a riff directly. Speed metal Beatles… now that’s talent.

I was particularly impressed with the way they treated some of the Beatles’ faster stuff, like “Blackened the U.S.S.R.” This one really captured the jittery and aggressive feel of the metal, but it floored me to hear McCartney’s lyrics coming out, especially knowing that he himself was kind of spoofing the Beach Boys anyway. Makes for some interesting listening.

From a production standpoint, there are a few tiny flaws, though. I had trouble reconciling the incredibly heavy sound of the guitars and drums with the unfortunately under-produced vocal sound. The singer sounds like he’s trying too hard to sound like James Hetfield (which is part of the joke, but still…), and the way it’s recorded makes it sound like they did it on a basement four track with no filters or compression.

Despite that little problem, Beatallica entertains with their interesting mix of crushing riffs and funny parodied lyrics. If you’re a fan of either Metallica or the Beatles, you’ll get a kick out of what this extremely talented foursome has done.  [ END ]