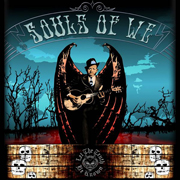 Back in the eighties George Lynch made his mark on the metal scene playing guitar in Dokken. After firmly cementing his reputation for being a stellar shredder, he went on to form the Lynch Mob another vehicle that displayed his unbelievable prowess on the six string. Fast forward to present day and Mr. lynch is back with a killer new disc featuring an all-star cast of guest musicians. Souls of We is his newest venture and their debut disc titled Let The Truth Be Known is quite the rocker.

Complimenting Lynch’s guitar playing is vocalist London Legrand (Brides Of Destruction), drummer Yael (Tom Morello, Alex Skolnick) and bassist Johnny Chow (Systematic, Fireball Ministry). There are also numerous guest appearances on this disc such as Morgan Rose (Sevendust) and Fred Leclercq (Dragonforce). The result of their hard work is Let The Truth Be Known, which is stacked with powerful rock and roll anthems that effervesce with raw energy and bring to mind the killer riffs, sing along choruses, and unrefined- rock of days gone by. Because, while this album is fresh, new and innovative it also retains an old school metal sensibility about it.

Another thing that this CD has going for it is the production. I am a sucker for tight, big sounding, well recorded records and this album is all of that and more. It was self produced and mixed by Mudrock (Avenged Sevenfold, Godsmack).

If someone told me had .99 cents and wanted to know what song off of Let The Truth Be Known to purchase, I would have a hard time picking one favorite. This is really a fantastic record, but If pressed to make a choice I would probably choose “Push It” and “Ghandi’s Got A Gun.” Both of these songs withstood repeated listening at incredible volume while traveling down the interstate.

I cannot say enough about this disc. It really is that good. There are no gimmicks and no filler just good solid down and dirty metal, the way it was supposed to be played.  [ END ]