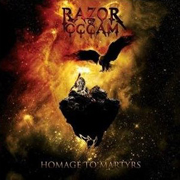 Combining elements of Black Metal with those of Death Metal, Metal Blade Recording artists Razor Of Occam have constructed a gritty, ominous and menacing CD entitled Homage To Martyrs. This album serves up a spellbinding array of dark delight right from the very beginning with chaos following throughout the rest of the disc.

The band’s music explores all the dark and gloomy themes one usually associates with this musical genre. Along the way, there is some very noteworthy and unexpected playing to go along with it; inexplicably fast and furious drums propel the songs along at breakneck speed. The production is crisp and clean which is no easy task when you play this type of music at breakneck speed.

The throat shredding vocals fluctuate between low menacing growls and diabolical screams that are very consistent with other Black Metal releases. I really dig the instrumentation going on in Homage To Martyrs but the vocals began to grate on my nerves after the second or third song.

For me Homage To Martyrs is a bit too much, but it definitely holds its own when compared to other records released in this genre. If you are a fan of Destroyer 666, Diabolical, Maze of Torment or Dekapitator, then this one is most definitely for you.  [ END ]