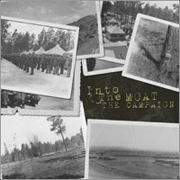 The Campaign is the newest release from Metal Blade Recording artists Into The Moat. Formed in 2001 these guys are going strong and have released what I feel is their best effort yet. Produced by Eric Rutan (of Hate Eternal and Morbid Angel fame) this is one hell of a record.

The Campaign is a bit different from the band’s previous releases and within the genre for that matter. While this is classic technical death metal the speed seems to have been slowed down allowing for all of the instrumentation to be heard much better – there are some very technical riffs running throughout every song. Don’t get the wrong idea though, this is not a soft album, quite the contrary this is a balls out, heavy as hell disc that is sure to be a crowd pleaser.

My favorite track by far is “Law Of Conservation” mainly because it starts off with a killer riff, yet is a slow burner of sorts which incorporates all the death metal elements one would expect: just with a slower temp, which ironically is where I believe the band really shines through. This is killer shit.

Other songs worth notable mention are “The Fuhrer” and “The Siege Of Orleans”, both of which have some unbelievably technical instrumentation going on, but it is not overdone to the point where it becomes more of an exercise in narcissism. Rather it is tastefully technical and very approachable, even for someone like myself who is not the greatest fan of the genre.

The Campaign is a seriously good disc from a band that is serious about what they do. Check these guys out, you will not regret it.  [ END ]