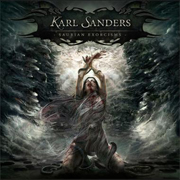 Think instrumental world music with a healthy dose of the eclectic and an arrangement that is quite different from anything you might have heard before and you get the vibe of Karl Sanders’, Saurian Exorcisms. The first song “Preliminary Purification Before the Calling of InannaStill the Desert,” begins with an interesting and inviting drumbeat and accompanying flute playing that sets the vibe for the rest of the record.

Alas, Saurian Exorcisms seems to wallow in lackluster songwriting and I found myself a bit bored about halfway through the record. Don’t get me wrong, the guitar playing (what little there is) is actually very good, but the songs become weighted down and mired in an over the top avant-garde almost ritualistic sensibility, with hypnotic drums and strange chanting, that makes the CD, for lack of a better word, boring.

There are too many long stretches of repetitive mesmerizing drumming that are most likely used to set the mood for the invocation of an exorcism or something to that affect. Maybe I do not have a good attention span but I after the first two songs I was all but done and it was very difficult to remain engaged for much longer.

On a positive note this CD is well produced and sounds really good. If you are a fan of obscure world music or you are looking for music that will help put you in a trance, this is for you. As for me, I just do not get it. While it’s not terrible, Saurian Exorcisms never really achieves memorable status either.  [ END ]

01. Preliminary Purification Before the Calling of InannaStill the Desert
02. Rapture of the Empty Space
03. Contemplate this On the Tree of Woe
04. A Most Effective Excorcism against Azagthoth and his Emissaries
05. Slavery unto Nitokris
06. Shira Gula Pazu
07. Kali Ma
08. Curse the Sun
09. Impalement and Cruxifiction of the Last Remnants of the pre-human Serpent Volk
10. Dying Embers of the Aga Mass SSSratu