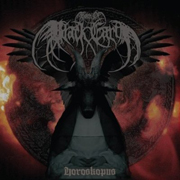 Ever since Death Metal’s origins it has been common place to use themes involving death and Satanism. Although, as with EVERY other band in the gene, Book Of Black Earth makes use of both themes, they do so without sounding lame or cheesy. Moreover, while the band has been together for 6 years, they play with the experience of serious Death Metal veterans.

Now I know these guys are considered to be death metal, but I do also hear hints of black metal. The black metal influence isn’t always present, but it’s certainly prevalent during the more melodic tracks as well as in the majority of their introductions. The intro track “2160” for example definitely feels like a black metal song, however quickly leads into “Death Of The Sun”, one of the most intense death metal tracks I have ever heard – at one point, I could see an all-out mass slaughter inside my head, but I won’t go into details!

When I saw the song title “God Of War”, I instinctively thought of the popular video game of the same title. As is to be expected, the track has nothing to do with the video game (thought I didn’t really think it would). Even though the song itself does not specify the god in question, I could easily see it being either Odin or Tyr; these selections would seem most fitting with the musical styling. Much like the majority of album, the lyrical content here isn’t very inspiring. It’s really just about judgment and people dying.

While the music is great, the lyrics weren’t as awe-inspiring to say the least. There are really only so many songs that can be written about Satan and slaughter. If you like Behemoth, pick this album up, otherwise maybe wait for something better.  [ END ]