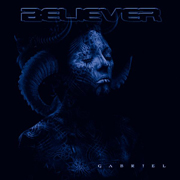 It is good to see these guys back after an extended hiatus. Believers’ fourth release Gabriel, is due in stores on March 17th, 2009 on Metal Blade Records and let me tell you, this is one hell of a comeback release. From the very first note a smile crept across my face and stayed there throughout the entire hour of finely-crafted, technically-unbelievable, metal tunes. I was a fan of the band in their early days back in the Eighties and Extraction From Mortality was a cassette that I wore out on more than one occasion and needed to replace.

Gabriel is everything I remember and more. While there is no denying this is a heavy disc, that is only one layer of this project. Melodic guitar parts are mixed with mind-blowing leads, the result is an inexorably hard hitting, dense, in your face CD that I feel was worth the wait.

In terms of sound, I feel the bands bio is about as accurate as you can get, “a sick, insane cross between Tool, Voivod, NIN, and Destruction.” Basically, the band covers a lot of ground in a relatively short amount of time but they do it well, very well. My favorite track on the disc is “Nonsense Mediated Decay” for the simple reason that it covers all the previously mentioned traits in just over eight minutes resulting in one of the most diverse songs on Gabriel.

I believe I would be remiss if I did not mention “The Brave” as well, because this song is another good example of the bands ability to combine slower passages with heavier styles. Even if you are not familiar with Believer’s earlier work, Gabriel is a damn good disc and one that is worth picking up.  [ END ]