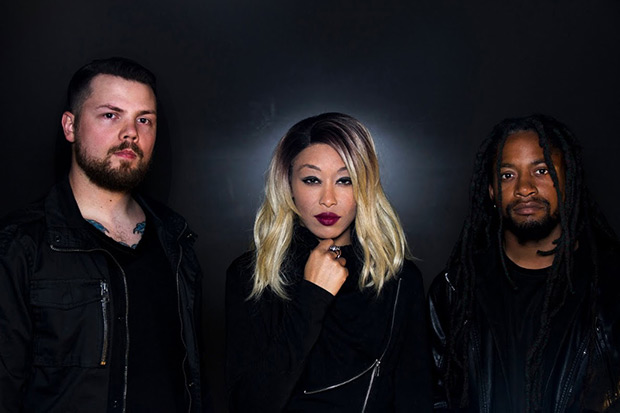 Although they have had their fair share of line-up changes since their formation in 2000, Tennessee based metal band Straight Line Stitch seems to have finally found a working formula. Perhaps the biggest change came with the addition of current vocalist Alexis Brown. She has the amazing ability to sing beautifully and melodically one moment and then scream just like the guys in the next. The band’s major label debut, When Skies Wash Ashore was released in 2008 and recently I had a moment to speak with Alexis about the current line-up, the future of the band, and her incredible voice.

So, your band originally formed in early 2000 and you joined in 2003, is that correct?
Alexis: That is correct.

So how did the current line-up come to be?
Alexis: Oh Lord! [laughs] It came about when, let’s see, I joined the band in 2002, 2003 maybe, my memory’s so bad. Jason our bass player, in 2006 or 2007, he was filling in for a band that we used to play shows with, good friends of ours, and he was just filling in and we were like, “man, he’s amazing,” so we asked him if he wanted to join the band and he was just like, “yeah,” and he came and we got along great, he’s an amazing bass player. And then, Pat Pattison, he came in about 2008, so, yeah, 2008, and he came from Connecticut, we got referred to him by some friends that we played with also and was in another band. And Seth is a founding member of the band, and right now we have a fill in drummer, he used to be their old drummer, his name’s Ian Shuirr, he’s just filling in for us right now. And that’s our current line-up in a big fat messed up nut shell!

That’s what it takes though, to get a good crew together, kind of trial and error.
Alexis: Yes, you have to find the right people, and that’s what we had to do, you know, certain people can get you the right people.

Yes, makes sense. Ok, so one thing I ask every band, is where they got the name.
Alexis: Ohh, you had to ask! [laughs]

Yeah, I ask the tough questions!
Alexis: The name, well, you know they already had the name when I joined the band, I think I even asked, “hey, where did you guys get the name?” Their old singer, which was a male singer, I think his mom did some kind of tailoring or something, and it’s like, a straight line stitch, or something like that, something weird, we get that question asked all the time, and everyone’s just basically like, “we don’t know,” I don’t know. [laughs] But that’s the closest I’ve heard, it was like from the old singer’s mom, she used to do tailoring or something like that and she did a straight line stitch and he thought it was a cool term, so I think that’s how the band name came about.

Well, it makes a good acronym too.
Alexis: Yeah, it has a sort of ring to it.

OK, so what is your song writing process like, do you all just get together in a room…
Alexis: Yeah, all the musicians get together and I’m usually just there sitting in on it and they, you know, play a bunch of riffs that they have and you know, something will form, they all have input. What I do is right after they get done putting the music together they usually tape it for me and I’ll just take it and I’ll go to some place where I’m not bothered, I’m by myself and that’s how I write the lyrics, just by myself, alone. And then I’ll come back and we’ll practice it as a full band, we’ll rehearse it as a full band.

Well, they teach you in English class to write about what you know.
Alexis: Yeah!

Your major label album was released in 2008, but of course you had several albums before that. Do you ever perform any of your older material live?
Alexis: We actually do, we do sometimes, we’ll have like a little wild hair and we’ll be like, “let’s just do this song,” but we discuss it during practice, we’ll say, “let’s do an old song, but let’s practice it first before we take it and do it live.” But we’ll play a few old songs, not a lot but there’s a few that we’ll do.

Well, you have an amazing voice, I have to tell you that, your voice is just incredible.
Alexis: Thank you.

How do you variate it so much, you can sing then you scream just like the guys… how do you do that?
Alexis: Well I think, and I don’t want to sound cliché, but it’s taken a lot of practice and the guys in my band push me a lot to always try to strive to be better so, just lots of practice. I learned to scream myself when I was probably about 16 or something like that, I just took like a guitar, a little guitar amp that I had in my room and I just screamed until I got it right and I’m still learning. Then we did this album, the major release album, I actually took some lessons with Melissa Cross, that was pretty fun and I learned some new techniques and stuff. I get to, in my warm ups and stuff, know how to switch from melodic to harsh vocals and do it fluently. I got a little bit of lessons and a lot of it was trial and error. Lots of trial and error.

Does your throat hurt at the end of the night?
Alexis: Well, the only time my throat really hurts is when I’m sick, and you know, you have to perform anyway, because you’re on tour and you can’t cancel a show, we’re a baby band, you have to play. When I’m sick and I’m straining and I have to get through the show my throat is blown, but if I’m not sick it’s easy, I can just talk like I’m talking now.

That’s really interesting! Well I know I could never do it!
Alexis: You know, you probably could because I never pictured myself being able to do it, just push yourself, I guess.

It seems like there are a lot more women involved with rock and metal music. Revolver has that monthly feature (The Hottest Chicks in Metal). Do you think it’s become sort of trendy to have a female in the band? Do you think it’s just more accepted now? What’s your take on that?
Alexis: You know, that’s a good question. I could say that it’s a little bit of both because it’s starting to be accepted now, where it wasn’t before, so now a lot of people are… well it’s a little bit of both, because you have the real deal, the girls that have been in this for a long time and have been striving to get to a place of acceptability, but then it’s a lot easier for any old band to come up. So, I guess the answer to your question is I feel it’s a little bit of both, it is more acceptable and it is starting to become a little bit trendy too, does that make sense?

Yeah. Well, it’s not like they feature a different guy every month, they just feature a different girl so they have to go and seek someone out rather than, and this is just my personal opinion, but they seek them out just because there’s a girl in the band rather than for their talent.
Alexis: Ya, that’s what I feel like, and don’t get me wrong, I think those things are cool, ya know, ‘cuz women are getting featured, and I think that’s really cool, but it’s like you said, I wish that, ya know, it wouldn’t be such a big deal that this is the ‘hottest chick in metal.’

OK, so what does the future hold for you guys? Have you had any time to work on any new material?
Alexis: Well, of course we’re gonna be touring our butts off for awhile and we’re actually starting to write for the new album so we’ll probably go into pre-production the beginning of next year, but for now our future is just trying to promote this album as much as possible ourselves, ya know hit the pavement running.