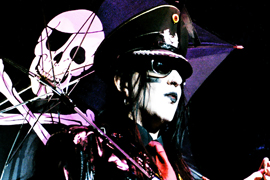 LA sleaze rockers Faster Pussycat hit the scene in 1987 with their self-titled debut and quickly made a mark for themselves on the burgeoning metal scene. Their follow up album Wake Me When It’s Over, was certified gold attributed in great part to their hit single and video “House of Pain.” When the band broke up in 1992 lead singer Taime Downe worked with industrial act Pigface before forming the band groundbreaking act, The Newlydeads, a band that had an industrial feel with dark themes running through it. In 2001, Taime reunited Faster Pussycat and he has not looked back since. The Power & The Glory Hole was released in 2006 on Full Effect Records and the band has been touring in support of it. I managed to track down Taime the night before the band was headed to Europe for a few weeks of touring. Here is what the so-called Godfather of Sleaze had to say about the band, their upcoming releases and what it is that has kept him in the business for over two decades.

Where are you guys playing tonight?
Taime: There is like a convention thing going on and we are just going to make an appearance and play a few songs.

You guys have been at this for over twenty years now. What is it that keeps you inspired and keeps you going?
Taime: Fucking Rock and Roll! I love music and it is just fun. The guys in the band and I have a good time you know. Playing different cities and different countries and shit… that is pretty much what keeps me inspired.

Looking back on the early days of Faster Pussycats, back in the Eighties, did you ever think you would be going strong all these years?
Taime: Fuck no!

What do you attribute the longevity of the band to?
Taime: I don’t know, booze, booze, drugs and cigarettes.

I know you guys have been working on a new CD. When can we expect it and what is it going to be like?
Taime: It is pretty much ready and when we get back from Europe we are going to go in and mix it. So probably the beginning of the summer. Maybe even sooner depending on if everything can get worked out. We are still working in the artwork and we have to gather all the photos and shit.

Do you think you will be able to reach a younger fan base with the newer music?
Taime: I don’t know. We already do.. I mean we have a new record called The Power & The Glory Hole that has been out for a little bit and we have a lot of young fans at our shows.

Do you get a mixture of older fans as well?
Taime: Exactly. People come with their kids and shit.

Do you find touring to be any harder now than you did in the eighties and nineties?
Taime: Not at all we just get in there and play a show. It is easier because we know what we are doing more now. Otherwise it is the same.

How do you maintain the level of energy and exuberance night after night?
Taime: I am going to go back to the booze, drugs and cigarettes. No really, once you get rolling, it is like a fucking routine. The first night you are like, man, I am fucking tired, but by the third show you just get into a rhythm. We are not working out or anything we haven’t worked out in a long time.

What songs from your catalog are still exciting for you to sing after all these years?
Taime: “Slip Of The Tongue”, “Cathouse” and “Bathroom Wall.” “Babylon” is always fun and so is “House of Pain” as well.

Well now that you mention it, I have another question for you. A lot of bands have a mega hit such as “House of Pain” and then they tire of playing it live. Do ever tire of playing this song?
Taime: Yeah… I get tired of playing everything. It is fun to mix it up a little bit. Playing it is fun but it is just like playing the same shit over and over again. Now that we play some of the new shit it is cool because we can kind of mix it up.

So you are playing a good mix of the old and the new tunes?
Taime: Yeah we mix it up man.

What do you think about the current state of the LA metal scene? It is not like it was in the eighties.
Taime: No, not really. I mean I used to do clubs but I have not done that in like a few years because the scene has been really slow. It usually runs in like five year cycles so hopefully it will pick up pretty soon because it makes it like more fun to go out and do shit. There hasn’t been shit going on lately.

So there is not that much support for local acts out there now?
Taime: Not really. Not that I am aware of. Usually I hear about shit but I haven’t really heard about anything making a buzz.

You guys are heading off to Europe in a few days. What are your plans for the band beyond that? What is next when you get back?
Taime: Well we are going to come back and work on the record and probably go back out on the road in the summer. We are working on new songs to but the main thing is the live record we have just been editing it and we need to fucking mix it.

Are you still working with the Newly Deads or has that been placed on the back burner?
Taime: We have kind of fucking incorporated it into the Pussycats. We are going to merge the two because they are both bands that I have created.

So will you be playing some Newly Deads stuff on this tour?
Taime: Not on this tour. We did some stuff on the last tour but we have not been to Europe since we had a new record so we will probably wait until the next tour. This time we are going to play some Pussycats songs we have never played over there.

You guys were part of the eighties scene that celebrated backstage debauchery. Does that stuff still occur like it did back then?
Taime: Of course, this is Rock and Roll dude! We will be fucking ninety and still getting blow jobs from fucking grannies and shit.  [ END ]