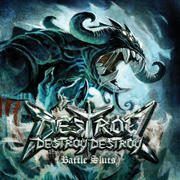 Their bio describes their sound as something one would hear when a hoard of demon-men trample their way from far away lands, seeking to scour all in their path.

Battlesluts is the band’s second release and it picks up the story where their last disc, Devour The Power, left off. A band of unjust battle-gods is challenging all in their path in an attempt to attain eternal glory. A combination of good old-fashioned thrash metal, a bit of black metal and a lot of melody result in a disc that is quite enjoyable to listen to.

Fantastical tales of Vikings and mythical beasts transport the listener to faraway lands where Destroy Destroy Destroy is leading the battle cry. Armed with remarkably heavy and extremely tight instrumentation this disc kicks some serious ass. There is something in here for just about any metal head. The guitar work is intricate and melodic, the vocals are throat ripping and downright menacing, and the drumming is so amped up and unbelievably fast that you will break a sweat just listening to it.

I was particularly fond of “Born Thunder” and “The Berserkers Field Of Whores” but by far the song that stood out the most was the “Battle Slut Drinking Song.” A sing-a-long style pub song with lyrics such as “Destroy Destroy Destroy/Our tales are grand to tell/So suck our dicks and eat our shit/You can all rot in hell.”

At the end of the day, Battlesluts is a great-sounding, heavy-as-shit record that I feel comfortable recommending.  [ END ]

01. The Second Coming
02. Battle Upon the Arctic Plains
03. Beyond The Scorpion Gate
04. Realm of Ancient Shadows
05. Born Of Thunder
06. To Die Without Honor (Interlude)
07. The Winged Panther
08. The Wretched Forest
09. The Berserker’s Field of Whores
10. Agents of Hypocrisy
11. The Return of the Geishmal Undead
12. Battle Slut Drinking Song