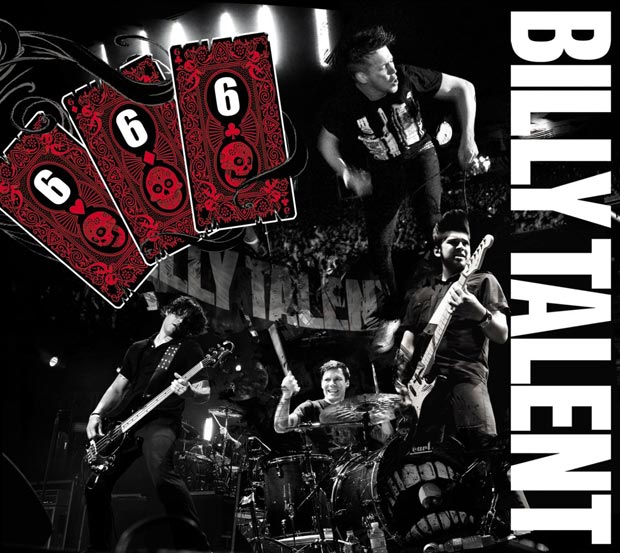 There is something about a live album that makes it one hundred and ten times better than a studio album. Hearing the fans’ reactions makes a band’s enthusiasm far more authentic and contagious. It is no surprise, then, that Billy Talent—who are known for their high-energy concerts—do not disappoint on their latest live release, 666, which, expectedly, is a smorgasbord of goodies for Billy Talent fans.

There may appear to be a lame assemblage of songs on 666 because some songs appear on both the DVD and the CD, but it totally makes sense. Listening to the CD will make you want to see Billy Talent play their songs live, and the CD-DVD combo offers this option. One guy on the DVD said he and his brother have seen Billy Talent seven times. Seven times! Clearly this devoted fan would have listened to the band’s songs hundreds of times, so for the dedicated, the track overlap is not going to be an issue.

666 is clearly not an idling-between-albums-while-we-try-and-think-of-something-good-to-put-out kind of deal; it is too good to be that kind of album. Billy Talent put a lot of energy into making it. When you listen to the CD, you feel the unremitting gusto the band put into every performance, and the fans give the band just as much energy in return.

Anecdotes on the CD are few and far between, which is good because that is what the DVD is for. The best, and the most relatable, anecdote on the CD and DVD is the dedication of a song “to that fucking bitch—my ex,” which segues, obviously, into “The Ex”. I’m sure anyone can relate and think of an ex that is a fucking bitch, especially when Valentine’s Day rears its ugly head.

The DVD includes performances in London, Dusseldorf, and Nurnberg, as well as other bonuses. It can be a sit-down deal or provide background music. It’s not just a bunch of random concerts and snippets of the band and their stupid shenanigans; it showcases Billy Talent’s purely awesome live performances.

Fans, highly or mildly obsessed, need to add this fabulous album to their collection of Billy Talent paraphernalia.  [ END ]