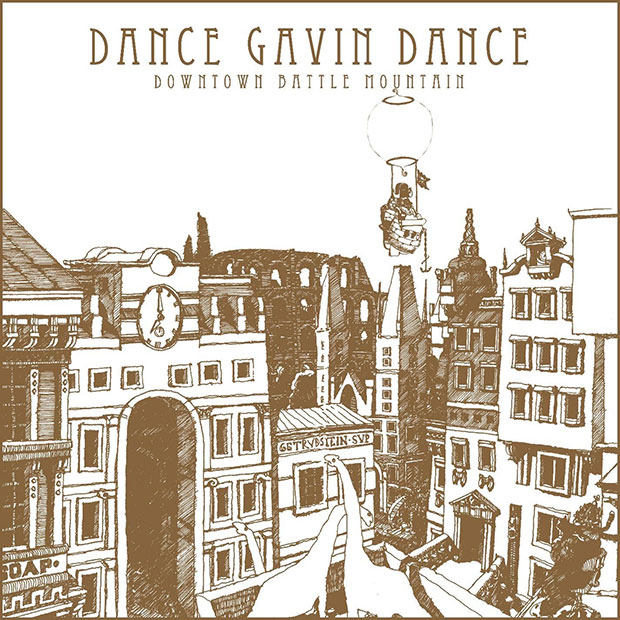 The dude that sings for this band is absolutely incredible. The dude that screams isn’t. Luckily for Dance Gavin Dance, the former trumps the latter and ultimately acts as the sole component on Downtown Battle Mountain, which propels this release above the heap of mindless, formulaic scream-sing-scream-breakdown albums that have seemingly captivated the attention of kids who’ve “just had enough” of their one o’clock curfews.

Joking (or not joking) aside, this album comes out of nowhere after a pretty (clichéd) clean intro with “And I Told Them I Invented Times New Roman”, which hits that longed for balance between melody and aggression just about perfectly. The soaring — and I mean soaring — vocals of Jonny Craig will immediately captivate listeners with a great use of the upper register, and airtight phrasing that lingers between measures. The backing music is very nicely woven together, but frankly it takes more than that to make any type of indent in the mind of a listener who’s become accustomed to this tired and redundant formula. However, combining competent back tracks with the ever-engaging talents of Craig makes a winning formula that gives Dance Gavin Dance a real shot at creating a memorable record.

The band actually doesn’t fare too badly at said task. While the aforementioned second track is undoubtedly the highlight of the album — despite its slightly misplaced closing breakdown — tracks like the album’s first single “Strawberry Andre”, or “The Backwards Pumpkin Song”, with its beautifully intricate dual-guitar leads nearing the closing scream-fest, nearly achieve the same level of accomplishment by just letting Craig fly on ahead. If it sounds like I’m overselling this guy’s talent, by all means, give me a run for my money and give this release a listen, because it won’t take you long to see where I’m coming from.

Granted, the record slowly loses steam near its second half. Even though the vocals remain stunning, the lack of diversity and, dare I say, easily accessible choruses can start to bog down a tired listener. Strangely enough, though, this is also one of the album’s charms, in that repeated listens continually reveal small, previously missed gems in each track. If Downtown Battle Mountain was mixed into an iTunes playlist and played on shuffle, nearly each and every track would come off sounding fresh and extremely engaging. As a whole, though, it becomes a little tiring with so much going on and a lack of familiar song make-ups. Jonathan Mess’ bland screaming doesn’t really hurt the record per se, but is unneeded at times, and at others, somewhat irritating; but for most of the record it fits competently into the mix and acts as a fair contrast to whatever Craig and the band are doing.

Dance Gavin Dance have done the right thing by leaning on their strong points: their intricate and beautifully interlaced composition, and Craig’s stellar vocals. By being so aware of themselves, the band have crafted a record that is a real treat, however familiar the style of music may be. Though it’s hard to describe what sets them apart from the trash — along with the fact that they lack the accessibility of a band like Alexisonfire — for anybody willing to donate some time and patience, they will be rewarded with a listening experience with one of the few bands that gets the sing-scream-sing formula just right.  [ END ]