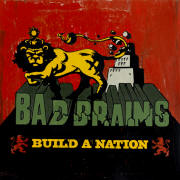 This album is good—pretty damn good, actually. The music may not be as relevant or current as it once was, but nostalgia isn’t the only thing this record has going for it. Half of the tracks on Build A Nation have a Jamaican-influenced dub sound, while the other half are classic Bad Brains rhythmic hardcore. This record is the epitome of the formula used by groups like illScarlett and Skindred: combining reggae and punk into a cohesive unit.

The instrumental performance, while competent, really has no place in this record’s overall makeup; its vibe and rhythm are central to Bad Brains’ sound and success, both of which are amply present on this release. Lyrically, we have much of the same from H.R., and the production on the record is pleasantly stuck in the past.

Bad Brains really haven’t built anything new into their sound for this current reincarnation, which is likely just fine for old fans (or new ones like me that got into the band post-mortem). What’s important is that the music still feels ‘real’—you can interpret that however you like.  [ END ]