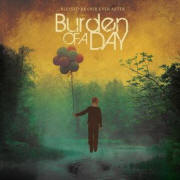 Burden Of A Day

Burden Of A Day are a Hardcore/Christian band who hail from the Sunshine State. Their music is well known around the United States and some parts of Europe. Unfortunately, if you dig their music and live in Canada, you likely won’t be able to see their killer live performance anytime soon, which I have heard so much about.

When listening to Blessed Be Our Ever After I couldn’t help but notice the similarities to some mainstream hardcore bands. The vocals remind me of Alex Varkatzas (Atreyu). It is a little banal, though it’s still pleasing to hear someone who reminds me of one of my favourite vocalists. I found the instrumentation very similar to that of Avenged Sevenfold. There is heavy use of palm mutes with deafening drums and exhilarating bass guitar.

Each song sounds similar to the last, which makes it difficult to choose a tune that sticks out. By choosing to only play one style of music it shows how Burden Of A Day lacks variety. I feel that they could have included some other styles of music into their album, just to show that they have the ability to stack up with the best of them. However, this does not take much away from the album. It is still excellent.

At the end of the day, when all is said and done, Burden Of A Day put forth one hell of an effort when making this album. Every track is as good as the one before it, which is something that is hard to come by in music nowadays.  [ END ]