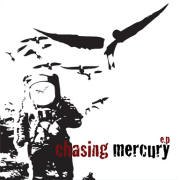 As I read the name of the town from which this band hails, my jaw dropped. “London, Ontario?!” I don’t believe before Chasing Mercury I had heard any band from that area. At least not one that rocked this hard! This album is seemingly pure intensity, with a jazzy breakdown, awesome instrumentals and the occasional slow riff thrown in. I definitely love cruising around in my mother’s van blasting all 5 insane tracks.

Chasing Mercury combines a few genres to bring you an overly enjoyable album. There weren’t a lot of things I didn’t enjoy about it. For one, the vocals weren’t the easiest to listen to at some points. But that’s the part where you listen to all those incredible riffs. Believe me; the album is full of awesome guitar work. It’s no DragonForce, but if you’re a fan of most Post Hardcore, 80s Metal, Pop Punk or Rock in general I’m sure you’ll love the fist shattering sounds of Chasing Mercury.

The cover art features an astronaut as well as a flock of birds which CM has tagged as “astro birds” along with, of course, the band’s name. It’s actually pretty cool and is consistent with their sound. The in-complexity of it also goes great with the fact that it’s their first EP. And I mean, c’mon, astronauts and “astro birds”? Obviously it’s on the moon. And nothing’s cooler then the moon. Maybe the moon is “chasing mercury”?! No one get that? Oh well, I thought it was funny.

Anyways, in conclusion, I loved the album and I can’t wait for Chasing Mercury’s live performance. I’d also like to plug the name of Chasing Mercury’s management team, SOLID Management. I highly recommend checking out the other bands being managed by this company. My personal favourites are The End Of August, who have a somewhat similar, but heavier sound to CM, and of course Chasing Mercury. These bands will blow your mind with Canadian talent.

I’d also like to finish off with a warning to all you “smart” kids out there. Mercury, the red stuff in old thermometers, is poisonous. Don’t consume it! Thank you.  [ END ]

01. National Insecurity
02. The Anti-Life Equation
03. Blessed With a Curse
04. The Deflector Shield
05. Seasons